This is who 2013 Virginia GOP Lt. Governor nominee and Trump supporter EW Jackson is citing, by the way: author at the far-far-far-right “Pajamas Media;” also his “New York Times bestselling book is Injustice: Exposing the Racial Agenda of the Obama Justice Department (Regnery).” According to MediaMatters:

In his forthcoming book, Injustice: Exposing the Racial Agenda of the Obama Justice Department, former Department Of Justice attorney and Republican activist J. Christian Adams desperately tries to maintain his credibility by doubling down on accusations of racially charged corruption in the Civil Rights Division. The book is filled with falsehoods, misrepresentations, and baseless allegations.

Also see some of the glowing reviews for this racist by extremists like Michelle Malkin (Adams “single-handedly exposes how Barack Obama and Eric Holder have systematically perverted the rule of law—for patently unjust, un-American, race-based ends. Adams witnessed first-hand the hijacking of the DOJ by radical leftist ideologues and interest groups. Now he reveals everything: the full story of Holder’s coddling of New Black Panther Party poll thugs, corruption run amok in the Civil Rights Division, open borders advocacy, selective law enforcement, and much more”) and Andrew Breitbart himself (“Adams shows how the institutional Left has turned the power of the Justice Department into a weapon against the rule of law.”).

Kind of says it all that EW Jackson would cite this racist nut, huh? And also that the Virginia GOP would have nominated EW Jackson for Lt. Governor of Virginia in 2013. Sadly, the party hasn’t improved since then, as its steadfast support for raging misogynist, racist, sexual abuser, extremist, authoritarian, etc, etc. Donald Trump demonstrates. With that, here are EW Jackson’s latest allegations, 100% false and inflammatory as always. 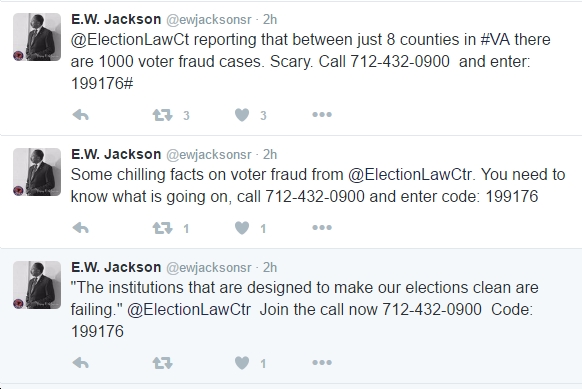 P.S. See President Obama, below, talking about the irresponsibility and lunacy of Donald Trump falsely alleging voter fraud – “every expert, regardless of political party…who has ever examined these issues in a serious way will tell you that instances of significant voter fraud are not to be found…”