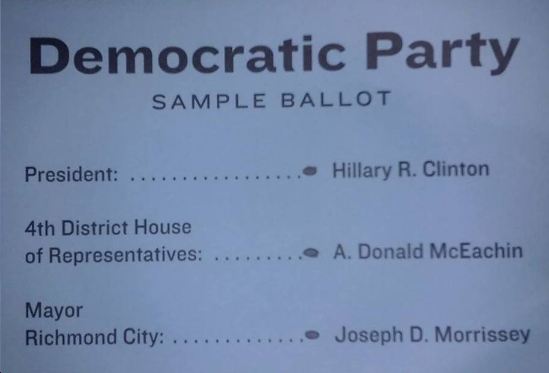 UPDATE 6:55 pm: The Democratic Party of Virginia has filed a lawsuit against Richmond Mayoral candidate Joe Morrissey, saying his “campaign is engaged in a flagrant and intentionally misleading violation of campaign regulations,” and that “Morrissey does not have the endorsement of the Democratic Party of Virginia or the Richmond City Democratic Committee, and we are requesting that he cease these activities immediately.”

I’ve been saying for weeks that Jon Baliles – as impressive as he appears to be, from everything I’ve seen and heard – needed to drop out, as he had no chance realistically speaking, and probably endorse either Jack Berry or Levar Stoney as the candidate to stop the utterly unacceptable Joe Morrissey from becoming Mayor of Richmond.  Instead, Baliles waited until just a few days before the election and didn’t endorse anyone.  Let’s hope this is enough for either Berry or Stoney to either: a) win on November 8; b) force a runoff with Morrissey and win then.

This campaign has been deeply personal for me, because I truly love – and I choose that word deliberately – the city of Richmond. I love Richmond’s people, our diverse neighborhoods, our sensibilities about honor and hard work, and special sense of history – a history that perhaps more than any other city speaks to us in vivid color about both our failings and our triumphs as human beings.

Every door I have knocked on has brought forth a conversation that made me wiser, enriched me, and reminded me why I have been so fortunate for the past decade to serve the people who call this city their hometown. I have become a better person from getting to know so many Richmond residents.

We are a city and a people on the verge of greatness if only we can have the good sense to make some smart choices and some tough decisions in the coming years. And I would like to make public today what is, for me, the most difficult decision of my adult life, and that is to withdraw from the mayor’s race.

As some commentators have noted, I am not an emotive person, and I’m not comfortable with the idea of publicity for publicity’s sake. I was taught that doing quiet work and not fighting for headlines is a good thing. During my time in city government, I’ve always relied on studied reason, input from the community, and common sense. And I hope, with great sincerity, that my campaign has made our supporters proud in some small way.

It has been my focus to look at issues and policies with details that aren’t reducible into sound bites or campaign slogans. As other candidates have adopted my proposals as their own, I have tried to refrain from taking credit or scoring political points – I have just been happy at the progress and glad to share a good idea, and I have tried to run this mayoral race the Richmond way – with substance and with grace.

And I speak now to those of you who have pleaded with me to stay in the race to the very end no matter what. I have heard you “loud and clear,” and I do not withdraw today to devalue your vote or your support. To the contrary, I withdraw today in an attempt to honor you, as I will explain.

To all of you in every district that I’ve spoken with on your front porches, at festivals and restaurants, to everyone who has contributed, volunteered, made calls, and knocked on doors – I understand your desire for a mayor who will be beholden to no one and accountable to everyone. That has been my main message.

I recognize your vision for a better Richmond, a city allowed to blossom by throwing off the constraints of a dysfunctional city hall, and I share that dream. We have an incredible future that generations young and old want so badly to unleash. Yet, I must withdraw from this race today to do my part in ensuring that this election does not diminish or destroy that promising future.

I’ve tried very hard not to cast stones. It is not my way. While there are other candidates who can ably fill the mayor’s job duties, there is one who simply cannot. That is the controversial and divisive candidate who has received national and international negative attention. Regrettably, that candidate’s selfishness and stunts only grow with the approach of Election Day. I can no longer risk splitting votes with other candidates if it means electing someone who so plainly cares only about himself. If there ever was a time we need collaborative people in city hall to address our city’s problems, now is that time.

My withdrawal from the race, however, is not a guarantee of the absence of a fragmented count. There will still be at least two major alternatives to Joe Morrissey that would split the opposition vote. The only realistic way our city can ensure that we are moving forward on the morning of November 9 is for other candidates to withdraw and consolidate. Not doing so could result in the outcome so many people fear.

It is understood that my supporters may still want to vote my name on the ballot next week to send a message about the type of mayor, and the type of accountability, in city hall they demand. I completely understand and respect that. But with humility and appreciation for your trust, I ask that you not cast a protest vote – because the stakes are too high and our city’s future is too valuable.

It has been my great honor to serve my district and our city on City Council and I will continue to find ways to serve quietly wherever I might be able to help. Today does not end my commitment to those who joined our cause. We have great things to accomplish together as a community of friends. Together, we will do the hard work for our families, businesses, friends and neighbors. We will not shrink from the important conversations ahead. I owe all of my supporters nothing less and I pledge my continuing commitment to Richmond.