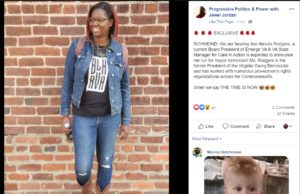 lowkell - November 2, 2016 2
UPDATE 6:55 pm: The Democratic Party of Virginia has filed a lawsuit against Richmond Mayoral candidate Joe Morrissey, saying his "campaign is engaged in...

Video: Richmond Mayoral Candidates Go After Each Other in Debate Closing...

lowkell - October 17, 2016 0
The latest Richmond Mayoral debate (the only live, televised one apparently) just ended a few minutes ago. Here are the closing statements, in which...

lowkell - September 28, 2016 3
Verrry interesting poll results in the Richmond Mayor's race, particularly compared to the August 30 poll which had it as Joe Morrissey 28%- Jack...

lowkell - September 20, 2016 0
There was a fascinating debate in Richmond last Thursday between Mayoral candidates that is well worth watching (click here to do so). For now,...

lowkell - August 30, 2016 5
This new poll is consistent with what I've been hearing for a while now, but it still boggles my mind that friggin' Joe Morrissey...

Or agree to resign as Chair either if the federal appeals court overturns Judge Wright Allen in Bostic v. Rainey (and/or the Harris case) or if the federal court ruling is appealed to the Supreme Court. In the unlikely case where the ruling is upheld and not appealed, stay on.

Citing an order by the U.S. Supreme Court to halt same-sex marriages in Utah as a federal court ruling allowing them is pending appeal, Brown said "the stay gives us hope that it will be overturned" and that "it is not all lost." - reported in the Richmond Times Dispatch

Come May, there is small doubt that the Democratic Party of Virginia (DPVA) will be called upon for a strong statement of support for same-sex rights. A Party Chair whose views are "evolving" won't carry that water. The Chair must be as dedicated to same-sex equity as those who have vowed to continue the fight against it.

Or, lie. Say you genuinely support marriage equality. You have to decide whether being a hypocrite or a liar is the greater sin; clearly you have to commit one. You do have some experience which will inform your choice. You didn't bat an eye when you spun a tale of success regarding the training camp blunder.

Your choice. But "evolving" isn't leading; it's following. The DPVA deserves a leader who can be honest about where the Party is, be certain where it should go, and be able to deliver tangible results.

It must be tough being an elected Virginia Democrat; with Governor McAuliffe leaning on you to support his choice for the Virginia Party Chair. No matter where you stand or how this turns out, Terry will be there when the smoke clears. There is no public option. Tough business, this.

So really, the support for Dwight Jones coming from elected officials must be severely discounted. Many of them don't have a vote in this selection or have regularly failed to attend Central Committee meetings, so there they have no say either. And at this point, after the Boyd Marcus maneuver, they cannot be certain if there would be any consequences if Jones does not become Party Chair. The vote is closer than many will acknowledge and a secret ballot provides cover for the principled stand.

"Should Jones assume the chairmanship, it will be interesting to see how Democrats finesse painting Republicans as intolerant for embracing a view their own head of the party shares." - Richmond Times Dispatch Editorial

On the face, some pretty savvy members of the General Assembly have come across as illogically rationalizing their support for Mayor Jones. Calling the objections a litmus test or saying Jones is being denigrated is about the only way you can respond when your Party's Governor has leaned in on you. Rejection of litmus tests applies more appropriately to candidates for elected office, not to the face of the party. And what does it mean when you say Jones should get a pass because the Governor is at fault for the selection?  If Dwight Jones aspires to be Governor, this may be his Waterloo. His choices are not what he wants them to be. They are to announce an incredible revelation or to step away. If he becomes Party Chair, he will spend four years documenting his inability to deliver on promises. Unlike unsubstantiated claims of $40 million in capital investment, failures to fill seats in the House of Delegates and state Senate are readily evident. Bad posture for one who will want to claim effective stewardship.

You have to wonder if Maureen McDonnell will be hyping Anatabloc at the gates to the Redskins camp. Somebody has to make some money off of this fiasco of a deal. As the layers of the arrangement unfold, it is clear that Bankrupt Bob had a hand in it.

That doesn't help much. So, maybe there is reason for concern:

"We're trying to get information to assess how well they are handling the preparations for this and whether there's going to be a full accounting."  - Wayne Taylor, secretary of Better Government for Richmond in the Richmond Times Dispatch

Here's a start. The number of camp visitors is projected at 100,000. Keeping it simple and being generous (the projection has been reduced to 65,000), we'll say all of them come from out of town and they will spend all of their hard earned dollars inside the city of Richmond so that all the tax revenue is generated there. Of the 5.5% state sales tax, something on the order of 1.65% will be returned to the city's general fund. A little math and that means every man, woman, and child attending must spend $303 (so a family of 4 must spend $1212) dollars to cover just the base $500,000 Redskins corporate welfare. We'd better hope for some well healed visitors. And that isn't anything near the bottom line for Richmond. Those figures really need to be doubled or more.