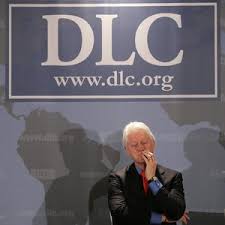 Turning and turning in the widening gyre
The falcon cannot hear the falconer;
Things fall apart; the centre cannot hold;
Mere anarchy is loosed upon the world,
The blood-dimmed tide is loosed, and everywhere
The ceremony of innocence is drowned;
The best lack all conviction, while the worst
Are full of passionate intensity.

Surely some revelation is at hand;
Surely the Second Coming is at hand.
The Second Coming! Hardly are those words out
When a vast image out of Spiritus Mundi
Troubles my sight: a waste of desert sand;
A shape with lion body and the head of a man,
A gaze blank and pitiless as the sun,
Is moving its slow thighs, while all about it
Wind shadows of the indignant desert birds.

The darkness drops again but now I know
That twenty centuries of stony sleep
Were vexed to nightmare by a rocking cradle,
And what rough beast, its hour come round at last,
Slouches towards Bethlehem to be born?

In the face of the failure of identity and liberal politics, Bill Clinton and his advisers made a deft and marked calculation: accept the economic policies of the right, but back them up with a liberal social agenda. As a result, Bill and the Democrats, who took the names “Third Way” and “Democratic Leadership Council”, fully abandoned any pretense of protecting the ECONOMIC interests of working families, banking instead that the mantra “Fiscally Conservative, Socially Liberal” could define a generation. It worked.

Bill Clinton was elected President of the United States two times, and while he made some strides in expanding acceptance of minorities and sexual orientations, his economic policies were decidedly conservative. He stripped away the wall between commercial and investment banking. He opened the way for massive media consolidation. He cut access to the social safety net and proclaimed “The end of Big Government.”

Bill Clinton’s national success as a President emptied out the ranks of genuine progressives, and left progressive politics foundering for a generation. Al Gore, John Kerry, Barack Obama, and Hillary Clinton are all Democrats in the “Fiscally Conservative, Socially Liberal” vein. They sought to work across party lines to engage conservatives. They gave conservatives massive victories in everything from Judicial Reform, to Welfare Reform, to Health Care Reform.

It was an utterly centrist approach, one that protected the for-profit healthcare industry’s profits, while providing care for children, women, and the poor, critical from a public health standpoint.

Rather than accept the singular accomplishment of President Obama — that healthcare should be a right of Americans and that it could be done while protecting the for-profit healthcare industry’s profits — and rather than accepting landmark legislation that served the broad interests of all Americans, the conservative movement took the legislation as a great abomination. They labeled it fascism, socialism…you name it. They used it as a rallying cry to denounce what they claimed to be a murder industry and an attack on religious liberty. They shamelessly lied about everything they could, and terrified their people to rally against the President.

This led to the Tea Party revolution of 2010, which ensconced not only a strong Republican majority in the House and gutted the Democratic majority in the Senate, but more importantly turned control of governorships and state legislatures over to Republicans in a census year, thus allowing a nationwide Republican gerrymander that makes a Democratic House majority a near impossibility — potentially for decades to come.

It wasn’t reasonable. It wasn’t fair. Republicans and conservatives spread lies and disinformation and used the fear of the masses to overwhelm the Democrats’ reasoned approach to governance. Democratic technocrats saw the problems of the people and they gave them a solution. The conservative movement turned it into Armageddon and a call to rebellion.

A similar result followed from Bill Clinton’s embrace and modification of the North American Free Trade Agreement (NAFTA). The agreement was created by Ronald Reagan and initialed (but not ratified) by George HW Bush. By championing the cause of international corporatist trade, Bill Clinton and the Democratic Centrists opened themselves up to impassioned attacks on the world “neoliberal” trade infrastructure and let themselves be blamed for the corporate takeover of American democracy. Like “free trade,” this corporate takeover was championed overwhelmingly by congressional Republicans, with limited support from only a few centrist Democrats.

Those who ignore history are doomed to repeat it, and Democrats need to understand that the era of Centrism has been, on the whole, a political disaster for our party. During the Obama years, over 1,000 (!) elected offices have been lost to Republicans nationwide, from school board to state legislatures to the White House. Now, we need to take a look at why Republicans are a party with passion and the Democrats are a party without direction.

The best example of this can be seen in a gotcha moment from the 2016 campaign. Donald Trump, when pushed on the question of whether women who seek abortions should be punished, answered directly to the heart of the conservative movement, “There has to be some punishment.” This, quote, in and of itself, is the quintessential embodiment of the moral worldview of conservatism: the strict father paradigm.

George Lakoff, in his seminal exploration of the Cognitive Science of Politics, Moral Politics, explains that there are two political worldviews struggling for ascendancy in America: The Strict Father vs. The Nurturing Parent. Per Wikipedia:

The strict father model of parenting is one which values strict discipline, particularly by the father, in parenting.

Ideas involved in this model include:

——————–
The nurturant parent model is a parenting style which envisions a family model where children are expected to explore their surroundings, while being protected by their parents. This model believes that children inherently know what they need and should be allowed to explore their environment.

The parents are responsible for protecting their child during this exploration, including protecting their child from serious mistakes, by offering guidance. A child will be picked up if the child cries because the parent wants the child to feel safe and nurtured. If a child grows up believing that its needs will be met, it will be more confident when facing challenges.

——————
By abandoning the nurturant parent worldview for the strict parent worldview, Clintonism, in both domestic and trade policy, gave full sway in the American mental and emotional state to the Strict Father paradigm. Every time Democrats sided with punishment over treatment in criminal justice, for example, they built the emotional structures necessary for every American to side with Republicans. Every time they sided with international austerity economic trade, they encouraged America as a whole to punish the American working class in favor of the wealthy.

All the while, Republicans were building strict father arguments through their culture wars that demanded adherence to a highly hierarchical, and deeply resentful structure. Within the hierarchy of the strict father worldview, wealthy, white, Christian, American-born males reign supreme. Women are to be subservient to men. African Americans, Latinos, Native Americans and Asians, other religions and those without means have their place within the structures created by those wealthy, white, Christian men, but it is always subservient. And critically, anyone who does not adhere to the strict codes of conduct and status conferred by that worldview are to be punished.

Muslims are less. African Americans are less. Women are less, and they must take their rightful place as defined by the Strict Fathers — or punishment is to be applied. Thus, calls for Muslim’s to be identified and potentially exiled, calls for the “undocumented” to be deported forcefully, for women to lose reproductive rights (women who have sex out of wedlock are breaking the strict rules of the strict father and must be punished) — and on and on.

As Clintonian Centrism gives way to conservatism on economic policy, it reinforces it and allows itself to be blamed for the perceived excesses it enacts. When Bill Clinton and the Centrists abandoned progressive economics, they stopped fighting for the Nurturant Parent worldview.

The Nurturant Parent worldview is much different, and every policy follows from that difference. In the worldview of progressive policy, it is the role of parents and of government to protect each individual in society. It is also their role to provide individuals with all they require to identify their authentic path in life and to make it possible for each individual, group, organization and people to make their fullest contribution to the nation and mankind regardless of race, creed, sex or orientation. Each may find his way, that each may give all they are and fulfill a singular powerful destiny.

The great failing of Democratic Centrists is that they abandon the power of the individual to find their way to self determination.

It doesn’t matter whether you want to live your life as a mechanic or a politician, a farmer or a statistician, a soldier or a scholar; the Nurturant Parent worldview sets policy — economic and social, domestic, foreign, and trade — that helps support you in your own aspirations and your own destiny.

Our national destiny cannot and must not be determined by the will of one demagogue, such as Donald Trump, and the hatred his movement engenders. Our national destiny must be the aggregate determination of hundreds of millions of deeply fulfilled, secure, and authentically empowered individuals giving all they are to a system that helped them determine precisely what they want to be.

The politics of destiny constitute the future of the Democratic party, America and the world. The Trump years will be years of increasing authoritarianism, as the corporatism of Paul Ryan eliminates the private sector, and the theocracy of Mike Pence uses religiosity to enforce a deeply hierarchical political structure on every American.

The misery that Trump, Pence, Ryan et al. enforce will require increasing repression and pain in order to reinforce itself. Democrats must first realize that every Centrist capitulation only serves to reinforce the authoritarianism of the right. We must immediately embrace the Politics of Destiny to oppose the coming onslaught of conservative privatization and authoritarianism, and prepare powerful policy and above all else, communications strategies, so that we can rebuild the structures of freedom that conservatism stands now poised to overthrow.