A story to begin … My father was a civil servant.  A college friend of his sent our family a selection of cheese every holiday season. Oh, by the way, this was a French friend, thus very (VERY) nice cheese. We — my sisters and I — really enjoyed those platters year in and year out.  Until one year when my father said: we will donate this to a near-by poor community for their holiday (actually, pretty sure, Christmas) party.  Okay, my sisters and I weren’t happy.  My father’s not very well-accepted explanation was substantively: “Look, even though this is below the threshold for gifts and even though he is a friend and even though the lawyers said it would be okay, a division of his company has the potential of bidding on work where I might play a part in decision-making. I do not feel it is right to accept the gift.” A strong and enduring lesson about basic ethics (not just within public service): try to understand, value, and fulfill the spirit of the rules rather than seek wiggle room around them.

In the waning days of the increasingly tight campaign in Virginia’s 10th Congressional District, far-right-wing Republican Representative Barbara Comstock‘s office sent out unsolicited mail.  Comstock’s mass mailing appeared to violate House Franking Rules and appeared to be potentially violation of the US Code. In short, to avoid use of taxpayer resources in political campaigning, the rules prohibit unsolicited (mass) mailings within 90 days of an election from a Congressional Office.  Certainly, the unsolicited item below — received by masses of VA10 households — appeared to violate these rules and absolutely violated their spirit. 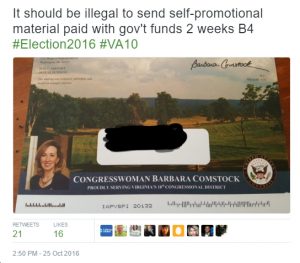 Oh, yeah, spirit … well, consider that Barbara Comstock has made a career out of dirty tricks’ politics and working the rules. And, here we have yet another example of this.  The Franking Rule has a definition of “mass”: sent to 500 households. What is Barbara Comstock’s staff claiming (without, from limited reporting to date, providing proof of their claims)?  Comstock’s team exploited the “499 loophole”.

Comstock’s offices said they had not violated the rule because of what Capitol Hill staffers call the “499” loophole: If a specific piece of mail goes to fewer than 500 constituents, it is not considered a “mass” communication and is exempt from the pre-election blackout.

Let’s be clear about this:

While perhaps within the letter of the law, certainly appears to be the antithesis of the spirit of the law.

Now, to be frank about Franking, Barbara Comstock is far from the only one focused on maneuvering around the letter of the law to violate the spirit of the law:

“You have members in battleground districts spending on franked mail at a far higher rate — and those are members who are primed to take advantage of this loophole,” said Josh Stewart, Sunlight Foundation. It raises questions of whether the mailers are intended to communicate with constituents or — as many suspect — to sway votes.

Let’s go back to something from fatherhood and parenting. As I tell (and try to show) my children: that other people do unethical things doesn’t make it right for you to be unethical.