Yep, this blog is sponsored by your theoretically state-regulated monopoly utility, Dominion Power. I say “theoretically state-regulated” because, actually, it’s the other way around, with Dominion Power actually controlling the state/telling it what to do and not do, rather than vice versa.  As for Bacon’s Rebellion, they have done this sort of thing before regarding “illegals” (check this out, for instance), are also big “climate skeptics” (aka, climate science deniers) and clean energy bashers who regularly cite “studies” by fossil-funded “think tanks.” All sponsored by Dominion Virginia Power, using the money YOU send them every month to pay for your electricity. Great deal, eh? 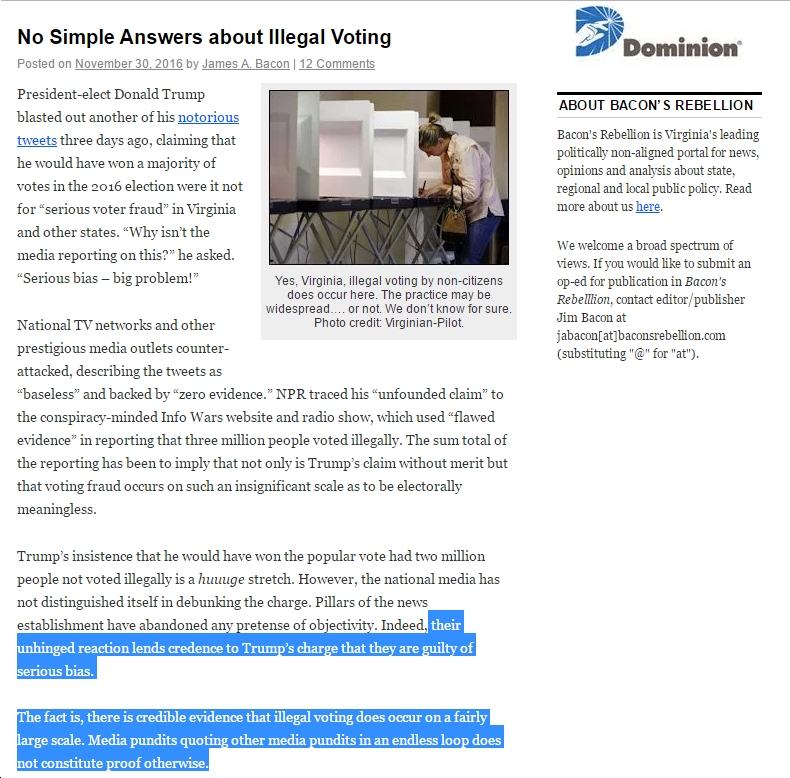 Actually, there is a simple answer to voter fraud: none or next to none.

The Public Interest Legal Foundation, an extremist group based in Indiana, came up with several largely bogus studies in Virginia and several other states just before the election alleging non citizen voting. It kinda came up with a lot of nothing.

The other material you brought up is likewise suspect.”There are uncertainties”…”dangers in extrapolating numbers” and so on. You hit the nail on the head there, Jim.

Trump may be nuts alleging widespread voter fraud in an election he actually won. But it sure isn’t preventing the right-wing echo chamber from pretending it is a massive issue…