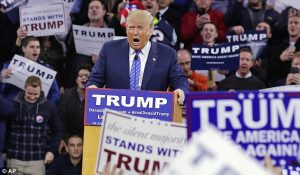 In conversations with a number of Democrats, I keep hearing the idea that once Donald Trump starts putting his plans into action, a good number of his supporters will realize the mistake they made in electing him.  The notion is that once they come to that realization, they’ll start to reject him, Independents will start to vote Democratic again, and maybe they will even take steps to remove Trump from office.  I disagree with this concept.

Throughout the campaign, Trump’s supporters were willing to ignore, disbelieve or overlook any of the bad press he got.  It didn’t matter that he was scamming people, sexually assaulting women, or anything else.  If they elected Trump despite these things, it would be hard to see what he could ever do to lose their support.  If he could “stand in the middle of 5th Avenue and shoot people” (as Trump has suggested), supporters would probably say “they had it coming.”

Case in point:  what’s the number one thing they wanted Trump to do, besides “build a wall?”  It was to prosecute Hillary Clinton.  But Trump backed down on that on almost the first day.  What has the “lock her up” crowd done?  They’ve ignored that, and some have even gone on to say it was a brilliant strategic move.  Sure, they’ll whine a bit when Trump breaks his promises, but they’ll never veer off the bandwagon.

These folks will defend Trump to the bitter end, never blaming anything on him, always blaming the media, Democrats, or someone else for any failing.

Let’s continue to point out the hypocrisies — but also, let’s not kid ourselves about the nature of individuals who are part of what looks more like a cult than anything else.

As for the ones who voted Trump but are not necessarily die-hard followers, I think most of them just voted that way to “send a message” or because they were sick of the political system and just wanted to “blow it all up.”  Many of these voters are already jaded and are unlikely to be big participants in the political discourse.  Most of them were Republicans to begin with and are unlikely to switch sides no matter how disastrous Trump is.

We can stand up against the President-elect because it’s the right thing to do, regardless of whether or not it will cause his supporters to have a change of heart.