Here’s the antithesis of Christianity, as represented by “Bishop” EW Jackson, Trump supporter and 2013 Virginia GOP nominee for Lt. Governor. See below for REAL Christianity, per the Gospels… 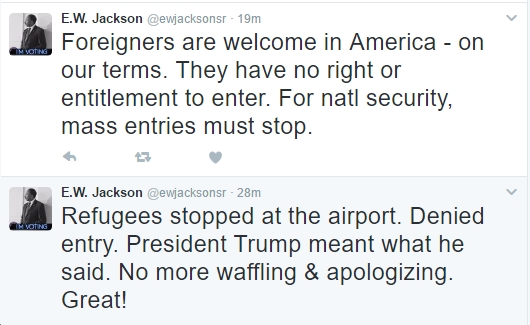 Now here’s REAL Christianity, courtesy of the Book of Matthew (h/t to Waldo Jaquith on this one; bolding added by me for emphasis).

“Then the King will say to those on his right, ‘Come, you who are blessed by my Father; take your inheritance, the kingdom prepared for you since the creation of the world. For I was hungry and you gave me something to eat, I was thirsty and you gave me something to drink, I was a stranger and you invited me in, I needed clothes and you clothed me, I was sick and you looked after me, I was in prison and you came to visit me.’

“The King will reply, ‘Truly I tell you, whatever you did for one of the least of these brothers and sisters of mine, you did for me.’”

Finally, check out this tweet: “I want to repeat: Green card holders were handcuffed, their social media was reviewed, and they were asked their views on Trump. #MuslimBan” To put it mildly, this is neither Christianity nor is it America…

In short, the VA GOP continues to waste its Central Committee's time and to go in circles... https://bluevirginia.us/2021/01/saturday-news-the-coronavirus-is-evolving-before-our-eyes-bidens-plan-can-build-a-bridge-to-a-better-economy-even-the-guy-mypillow-ceo-mike-lindell-wants-for-a-coup-is-confused#comment-5229951534 h/t @Jaaavis