A reflection from our current journey through Israel — having spent now one week plus in Jerusalem, a city that has been at the center of much important human history, much of it deep and rich, much of it at the core of our civilization, and much of it difficult, all of that true now in our times.

Jerusalem has fairly blown me away. It is a spectacular place. In fact, I think it is the most spectacular (wonderful? beautiful? magnificent?) city I’ve ever seen.

Whereas I expected to find Tel Aviv more polished and less gritty than I found it, with Jerusalem it was just the reverse. Having explored on foot from our digs in the German Colony, to the Center City, to the Old City, along the tracks on the Jaffa Road to the Central Bus Station, to Rehavia (a neighborhood), I am amazed by its many forms of beauty. It was only on the fourth day of our stay that we ventured into an area that was, if not ugly, without charm (as so many urban areas of our times are).

In the areas we have explored, an astonishing proportion of the landscape (meaning everything that one sees) seems to have been shaped with love, with thought, with an aspiration to beauty and meaning. Whether it be the beauty of the YMCA building, or of the Jerusalem Theater, or countless other places, things seem to have been fashioned with unusual care to express some sort of vision.

Not even in Paris (which, admittedly, I haven’t seen in 50 years, but my impression from what I’ve read is that the landscape there has been degraded more than enhanced) have I sensed that people have striven so powerfully to make a place an embodiment of some basic collective ideals.

Is there another place where genuine inspiration – innumerable inspirations — has played so great a role in shaping the place, as the Jerusalem of today?

Of course, these modern inhabitants of Jerusalem had something amazing to work with from the outset. (I’ll send soon a picture – not yet taken — from a strip of parkland along King David St. across a deep valley to the walls of the Old City. When I peered across that view, I experienced a heightened consciousness as if a mind-altering drug has just kicked in.) This city is saturated, of course, with historical and religious meaning. So already there was much to inspire people to honor and beautify the place as they created this modern city.

But I think there’s more to it.

Is it the pent up energies and yearnings of the Jewish people from two thousand years of not having a place of their own, of saying each year “Next year in Jerusalem” (from places all over the globe) that inspired what has been fashioned of Jerusalem during the past decades?

So how can one express what is extraordinary about what has been created here in our times? Let me venture an answer in terms of the proportions one finds of the various ingredients that make up this landscape.

New York City is also a spectacular place, and as the cultural capital of America it reflects a broad range of values. There are universities, museums, libraries, concert halls, etc. Everything is there.

But Jerusalem – it appears to me from our treks across the landscape – differs in being composed of such elements in very different proportions. Jerusalem seems exceptional in how rich a spectrum of human values is embedded in its landscape.

Imagine that we devised a method of assigning a magnitude to every entity in a city, whether it be a corporation or a museum or a coffee shop or school etc. How big a part of the whole is it?

Accordingly, each entity in New York City would be given a score reflecting its magnitude in the overall body of the city: so much for Rockefeller Plaza, so much for Goldman Sachs, so much for the New York City library, so much for Julliard, etc. through all the corporate skyscrapers, stores, institutes etc. in the city.

Then imagine we did the same for Jerusalem.

Here’s what the contrast that I believe would emerge. With NYC, for all its richness, I expect that our toting up of the score would find that capitalistic/commercial values would be overwhelmingly dominant. The other pieces, for all their being world-class, would be more on the fringe than in Jerusalem.

What has struck me as remarkable about Jerusalem – not just compared to New York, but compared to any other city I’ve seen – is how full a range of human values — cultural, religious, spiritual, educational, moral, intellectual, etc. — is richly embodied in the landscape. Such a large part of the body of the city consists of entities like institutes, schools, museums, centers, studios. And one thing more: so many of these seem to be not mechanically cranked out (every city needs a concert hall) but to have grown organically out of someone’s (or some group’s) ideals and sense of a mission in life.

(And when it comes to the domain of business, my impression is that small, non-corporate businesses with human proprietors represent a much larger proportion of Jerusalem’s world of commerce than we Americans find in our own landscape.)

All that contributes to what’s special about Jerusalem.

One more thing about Jerusalem, before I close, and this was true of Tel Aviv as well: nowhere have I seen nearly so many streets named after specific individual human beings.

Not just the grand figures of history, like King George and King David. But figures who loom less grandly in human history but who, in their own individual ways, were exemplars of some sort of human achievement or virtue or heroism.

Professors, authors, soldiers, benefactors, religious thinkers—paragons of some dimension of the human ideal drawn from times ranging from the distant biblical past to the virtual present.

The closest I’ve seen to this has been in Paris, where the likes of Victor Hugo and Voltaire get their own streets. But, unless I’m mistaken, the practice of honoring individuals of diverse sorts with the naming of places is far more widespread in these two main cities of Israel than anywhere else I’ve been.

It raises the question: what does this practice signify? And, to answer like Tevye (in Fiddler on the Roof), I’ll tell you: I don’t know.

But if I had to search for an answer, here is where I would look: Is there perhaps something in the moral structure of either Judaism or Jewish culture (or out of the combination of the two) that –to an extent unusual in the broader picture of humankind — emphasizes the individual and his/her task of becoming something admirable, worthy of being honored?

Is the culture focused, in other words, on motivating people to embody in themselves and their lives some sort, something of the human ideal?

Regrettably, I don’t know enough to know if I’m on the right track. I can say, however, that such an ethic was an important part of the family culture (created by Jacob and Pauline Schmookler) in which I grew up.

Whatever the reason, I feel confident in the observation: the naming of things here is more individual-centric than anything I’ve encountered anywhere else.

Photo I took from the ramparts of the Old City, under the Tower of David, outward toward the new city: 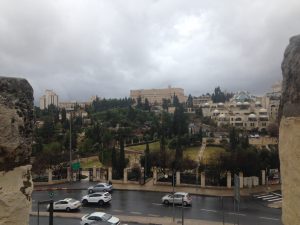