Unlike four years ago, when I was well aware that Tom Perriello was considering a run for Governor of Virginia, I didn’t even have an inkling of this.

Tom Perriello, the former congressman from Virginia, is considering a bid for governor, a move that would disrupt Democrats’ well-laid plans in perhaps the highest-profile election in the country this year.

This is a total surprise, at least to me, as I was assuming Ralph Northam had the nomination wrapped up. I’ve got a call into Tom Perriello, hope to hear back from him. In the meantime, feel free to speculate about what this might mean for the 2017 statewide races in Virginia. One thing’s for sure: so much for a boring “coronation” in 2017 here in Virginia.

P.S. I agree with Ben Tribbett, “Good lesson for everyone to learn in politics- nothing is ever final until the filing deadline.” 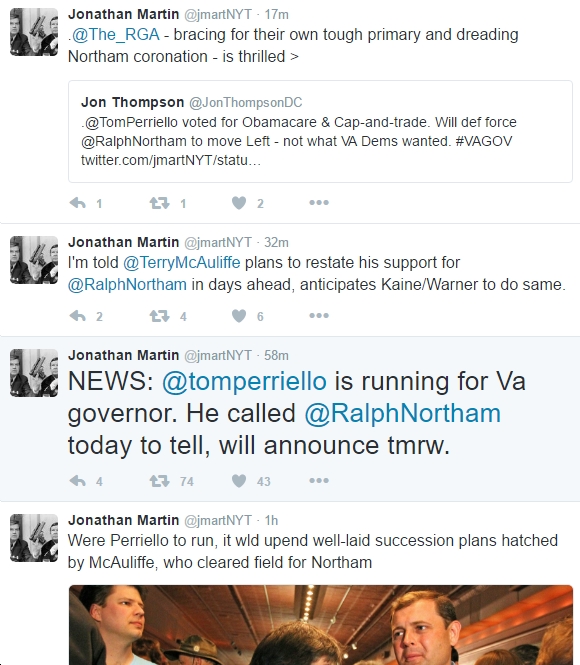 P.P.S. My general view is that primaries are very good things, for   a variety of reasons (e.g., they force candidates to get out their and actually campaign, they help candidates hone their messages and build their operations, they get activists engaged/energized, they increase name ID), and that they absolutely should NOT be discouraged by party honchos. In this case, I like both Ralph and Tom, so it would be a tough choice…would need to hear each candidate’s case for why they’d be a stronger candidate and a better Governor. Which, again, is exactly how it should be, IMHO.

Also, here’s some video of Tom.