Following President Trump’s dehumanizing executive orders to punish immigrant families this week, Tom Perriello, Virginia gubernatorial candidate, will join DREAMers and immigration advocates for a roundtable discussion in Falls Church. Tom will listen to their stories and ideas and discuss how, as governor, he will find ways to keep families together and ensure Virginia is a firewall against the kind of anti-immigrant agenda being pursued by the Trump administration.

See below for some video, with a few comments by me.

Here’s Perriello responding to a question about protecting the Latino community in Prince William County and the rest of Virginia from right-wing xenophobe, former Trump co-chair and 2017 Republican gubernatorial candidate Corey Stewart. Perriello muses on which Republican, Corey Stewart (representing the “extreme racist wing of the party”) or Ed Gillespie (representing the “corporate corrupt wing of the Republican Party”), he’d be more excited to face in the 2017 general election.

Perriello says the election of Trump might end up being seen in retrospect as the “last, dying gasp of a dying and aging mentality” and the emergence of a “progressive, inclusive pluralistic vision of American”; or as a “turning point where we started to go completely off the rails.” What determines that won’t be “fate,” but “who steps up” and says “no, not on my watch.”

Perriello says that the Republican Party has “changed a lot from the era of Ronald Reagan and George W. Bush” – and not for the better, certainly not when it comes to immigrant communities.

Perriello explains why he fights for DREAMers, says “this kind of service is its own reward; I fight for DREAMers because it’s the right thing to do, but also because my life’s better when I do it — our communities are better, our economy is stronger…it’s a purpose-driven life when you’re fighting for issues of justice.”

Perriello talks about making sure that the “loudest, most hateful voices are not allowed to define the space that you’re in.”

Perriello talks about things Virginia can do to protect immigrant families.

Perriello explains how movements “change the conversation,” the “political calculus” and the “sense of what’s possible.”

Perriello on bridging differences in Virginia and the importance of “breaking down myths in both directions.”

Introductions by participants in the round table and also by Tom Perriello, who talks about resisting Trump’s efforts to move our country backwards, including when it comes to immigration.

Powerful story by an immigrant from Guatemala about seeking refuge from near-certain death and her gratitude to the United States for taking her and her family in. 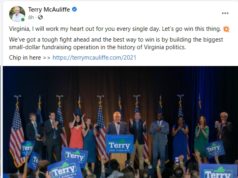