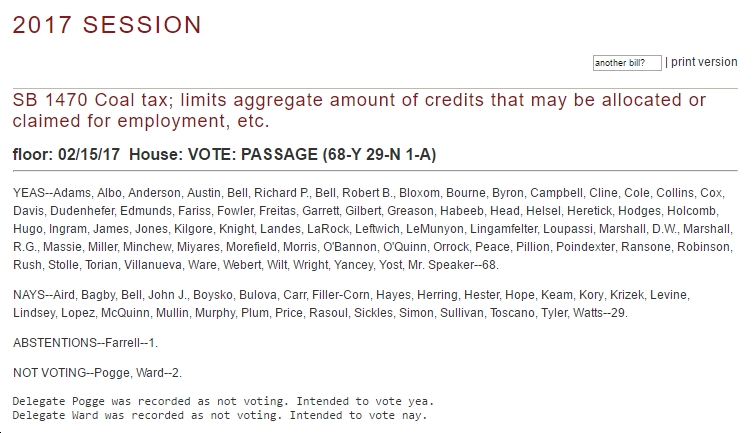 At this point, with the Arctic and Antarctic in meltdown due to runaway global warming, with oceans acidifying and with record heat around the world, there’s simply no excuse to be subsidizing planet-killing coal. Yet here we are, with a 68-29 vote yesterday in the Virginia House of Delegates for SB 1470 by Sen. Ben Chafin (R-Coal Industry) that:

Reinstates the Virginia coal employment and production incentive tax credit. The credit, which expired on July 1, 2016, could be earned on and after January 1, 2017, but before January 1, 2022. The bill limits the aggregate amount of credits that may be allocated or claimed for the coal employment and production incentive tax credit in each fiscal year to $7.3 million. An electricity generator must file an application with the Department of Taxation each year to determine the amount of credits that it may claim or allocate, including credits earned in prior taxable years. If the total amount of credits earned in a taxable year exceeds $7.3 million, the Department of Taxation shall apportion the credits on a pro rata basis. The bill also extends the sunset date of the coalfield employment enhancement tax credit through taxable years beginning before January 1, 2022.

I’ve posted the House roll call vote above and the Senate roll call vote below. Note that almost every Democrat, with three exceptions in the House of Delegates (Steve Heretick, Luke Torian, Jeff Bourne) and four exceptions in the State Senate (Dave Marsden, Lynwood Lewis, George Barker, John Edwards) voted against this boondoggle for the Virginia coal industry. Also note that these subsidies are aimed at helping Norfolk Southern and its port in Norfolk, which have seen coal shipments fall years in a row due to weak global demand, low prices and competition. All of which means that using our tax dollars to subsidize Virginia coal exports is basically a futile, wasteful endeavor, on top of being really bad for the environment.

By the way, see Ivy Main’s 2015 piece about Gov. McAuliffe vetoing this crap (hopefully he’ll do the same this year). Also read this (bolding added by me for emphasis):

It’s been 20 years since Virginia began subsidizing coal mining via these two tax credits, bleeding the state treasury of more than $500 million in all. And it’s been three years since the Joint Legislative Audit and Review Committee (JLARC) issued a critique of the various Virginia tax credits that included an especially harsh assessment of the handouts to coal companies. Yet instead of canceling the credits in light of the report, the General Assembly promptly extended them. Even Governor McAuliffe didn’t actually try to end them completely this year. Legislators rejected his efforts simply to scale them back, leading to this veto.

So if we didn’t get jobs for our $500 million, what did we get? Most of the money has gone to enrich coal companies, but a portion went to fund the Virginia Coalfields Economic Development Authority (VACEDA). VACEDA’s board includes coal executives, a fact which has served to intensify rather than lessen coal’s hold on the area.

In sum, it’s inexcusable that anyone voted for this planet-killing/budget-busting boondoggle, especially since the goal is to line the pockets of coal companies and Norfolk Southern. Instead, how about taking that money and using it to fund CLEAN energy development in southwestern Virginia? Or would that make too much sense?

P.S. Thanks to every Democrat who voted against this crap; I look forward to you all voting to uphold Gov. McAuliffe’s veto.