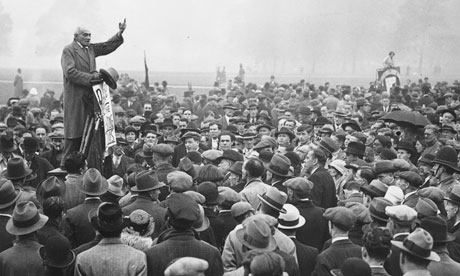 The disaster in which America finds itself today owes a great deal to lousy, superficial analysis in the media, social media and beyond.  Trump and his ilk are able to get away with shading the truth because so many casual readers are unable to figure out what anything means anymore.

We need to fight every day to cut through all of this BS to let the truth shine through. In that light, today I’m taking on the constantly repeated line that Trump is some sort of “populist” – noting that Googling “Trump populist” yields 10.7 million hits. This is a wholly inappropriate term to describe a right-wing elitist like Trump. Populism is at the core of what it means to be a progressive, so we can’t just allow this term to be stolen from us without a fierce fight.

The Populist Party (or People’s Party) was founded in 1891 to support the interests of farmers and laborers against the overwhelming power of corporate “robber barons” (of the railroads, steel industry, etc.) and corrupt politicians during the Gilded Age. Though a third party that elected few to public office and all but collapsed after five years, it had a profound influence on American politics and government over the next century. Much of Teddy Roosevelt’s and Woodrow Wilson’s Progressivism and FDR’s New Deal were built upon the original ideas of the Populists, whose platform included:

Needless to say, these are the exact opposite of the types of ideas that Trump and his ilk have brought to Washington.  Amazingly, some Tea Party conservatives even favor repealing the 17th Amendment, which initiated the direct election of Senators.  Glenn Beck and others on the right have made clear that they literally want to take America back 100 years, to before the Progressive Era of Wilson and Teddy Roosevelt.

While Trump is clearly not a large P “Populist”, it is the bastardized small p “populist” term that is so often and inappropriately applied to him.  To be fair to today’s media, this bastardization has been going on for a long time.  The influential historian Richard Hofstadter wrote a series of books and articles in the 1950s and 1960s first applying the term populism to a broad range of movements from William Jennings Bryan and Huey Long on the left to Joe McCarthy and Adolf Hitler on the right.

One commentator acidly noted that the only thing these leaders had in common was that they whipped up the masses, unlike the ‘50s elitist liberalism of Hofstadter and two-time Democratic nominee Adlai Stevenson:

The various, often mutually-incompatible definitions of populism, and the disparate examples scavenged from history, all are intelligible once you ask who the enemies of the “populists” were. Populists are the Other of the liberal / left intelligentsia, and all populists are guilty of all of the crimes of any populist.

But another way to take the populist concept is as a strictly stylistic pose, wholly divorced from any actual ideology or platform.  Another observer characterizes such stylistic populism as “anger and resentment…directed at ‘elites,’ [who] are usually economically, socially, and/or geographically distant… It is a method of identifying a villain and shaking a fist.”

This is actually a very imprecise way to characterize a pervasive political phenomenon. After all, how many pols can you think of who try to portray themselves as elites rather than commoners? Based on their rhetoric, pretty much every American politician was born in a log cabin.

The problem with referring to all who apply these play-acting techniques to politics as “populists” is that the term has an undeniably wistful, warm glow attached to it.  When you call a politician a “populist”, you generally mean that he (or she) is a Man (or Woman) of the People, a champion of the common folk against larger, evil forces in the world.

But just adopting a populist veneer to implement policies that shamelessly favor the most pampered elites is not “populism” any more than “near beer” is beer.  The con artist who fools people into being taken advantage of does not make himself any more admirable simply by wearing a Robin Hood mask.  He should not be rewarded with an attractive label for pretending to be a good guy any more than George C. Scott deserved a military medal for playing Patton in the movies.

There are other problems with the sloppy way in which this term is bandied about. First is the racism inherent in how “populism” is applied to American politics.  Was Obama ever judged a populist for locking up 93% of the African-American vote? No, because those people are not assumed to be the people.

Why?  It’s unstated, but…you know why.  So Democrats who cultivate the votes of traditionally marginalized groups are somehow labeled “elitists” rather than populists.  Yes, that’s unfair and ridiculous, but Republicans have managed to get it baked into the conventional wisdom.

If being a populist were just about the numbers – appealing to the common people, who must be the largest group in the country, right? – you’d expect Trump to be overwhelmingly popular.  How then could the populist candidate have lost the popular vote by almost 3 million and have a record low approval rate one month into his term?

One can only conclude that Trump’s “populism” is just one more example of conservatives repeating their marketing slogans enough times to get uncritical media voices into the habit of repeating them too.

So next time you hear the media making this mistake, please take the time to correct them.  It’s just one more way in which we need to deny Trump the legitimacy and normalization that he has done absolutely nothing to earn.