Blue Virginia - June 3, 2019 1
by Stan Scott Since I began thinking about running for the State Senate, a lot of people I’ve spoken to have asked how I can...

Time to Go on Offense: 50 Legislative Ideas for the New,...

lowkell - November 19, 2017 39
With 49, 50 or even 51 Democrats in the Virginia House of Delegates, including a slew of strongly progressive and pro-environment members, it's time...

“Rural Progressives”:  It’s Not an Oxymoron

Blue Virginia - July 7, 2017 7
by Anthony Flaccovento For the past several years, as most of rural Virginia has become increasingly "red," a number of us have been arguing that... 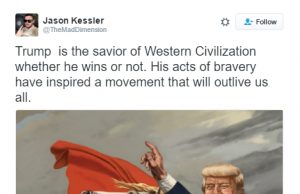 Don’t Ever Call Trump a Populist

kindler - February 22, 2017 3
Cross-posted at Daily Kos The disaster in which America finds itself today owes a great deal to lousy, superficial analysis in the media, social media...

Kenny Boddye - December 6, 2016 1
by Ken Boddye, 51st House District Democratic candidate It has often been said that the true character of a person or group is revealed when...

A Bernie Sanders Delegate Reflects on Philadelphia, Our Revolution, and...

Jason Rylander - July 31, 2016 4
I’m fond of a quote from F. Scott Fitzgerald: “The test of a first-rate intelligence is the ability to hold two opposed ideas in...

lowkell - April 2, 2016 0
A few years ago, I was at a dinner party and someone asked me what the difference between a progressive and a liberal was....

Liberal and Proud Of It

"How come liberals never admit that they're liberal?" he asked. "They've now come up with a new word called 'progressive,' which I thought was an insurance company but apparently it's a label."

Here's my response to Marco Rubio.

Say it loud and say it proud,
I'm proud of being a liberal and I won't back down.

Here is what I believe.

I believe that every American should have the chance to lay the golden egg of economic prosperity. At present, we are nowhere near this goal. For all of the Rubio's of America who have made a cozy place for themselves, there are thousands of others who, through no fault of their own, have not had the same opportunities for success.

I believe that a woman's body is her own temple to do with whatever she pleases.

I believe that unions are a benefit to society, imperfect as they may be.

I believe that the federal government has an important role to play in ensuring healthy environments and preventing runaway capitalism.