This is heinous, even by Prince William County Board Chair (and 2017 Virginia GOP gubernatorial candidate) Corey Stewart’s low, low, nonexistent “standards.” Good for Willie Deutsch, a Republican and Prince William County School Board member, for calling Stewart out on his “racist language.” Unfortunately, Deutsch is a rare case of Republicans strongly calling out the Corey Stewarts, Steve Kings, etc. of their party. Still, glad to see Deutsch doing it. Now, let’s see if the anti-Semitic jokester who heads up the Virginia GOP, John Whitbeck, will join Deutsch in condemning Stewart. Also, how about Stewart’s decade plus of xenophobic vitriol and demagoguery? Where has the Virginia GOP been all this time???

P.S. Stewart’s Reddit chat is here. Note that Stewart also agreed that Bill Clinton is a “rapist,” agreed that Terry McAuliffe is a “cuck,” vowed to “pass campus carry,” claimed the media is “FAKE NEWS,” claimed that Hillary Clinton is probably “in the woods, probably not with Bill,” and said he supports “deporting all illegal aliens, beginning with those who have committed additional crimes while in the U.S.” Of course this vile excuse for a human being is a Republican…vomit. 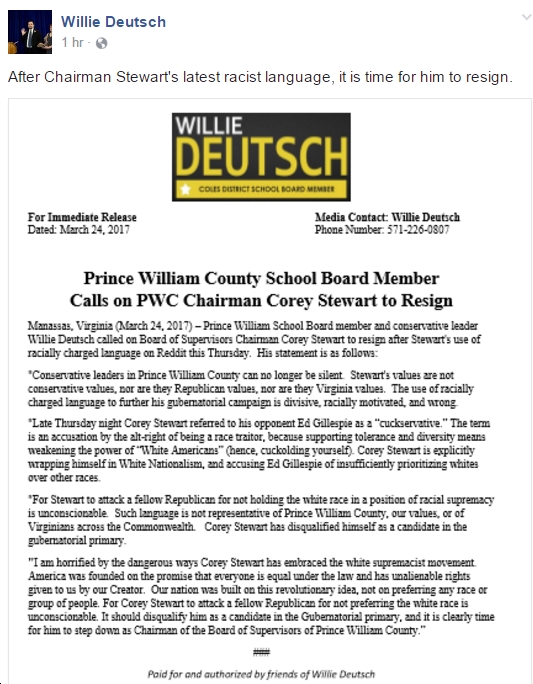 There's no paywall on Blue Virginia, and we definitely want to keep it that way! If you want to help support our work, you can donate here - thanks!