And the King will answer them, ‘Truly, I say to you, you didn’t, because you denied healthcare to the sick, and took free school lunches away from the poor, and turned refugees back to lands of oppression and danger.’”

–With apologies to Matthew 25:37-40, The Holy Bible, English Standard Version

It’s to be expected that the first Friday of Spring, the season of rebirth, would bring a spirit of rejoicing.  What was not so easily foreseeable, however, is that this past week’s celebration would center around the defeat of the Trump administration’s first attempt to repeal and replace Obamacare.  Even odder still?  Democrats’ strange bedfellows in this victory are the ultra-conservative, ultra-male, ultra-white House Freedom Caucus, whose new-found media starlet seems to be VA07’s Representative Dave Brat.

Four weeks ago, as cool dusk settled in Blackstone, Virginia, on a winter’s day that whispered more of May than February, the atmosphere in the town’s center was at once both electric and peaceful.  Hundreds of energized constituents in the Commonwealth’s 7th congressional district waited patiently for the doors to the Blackstone Herb Cottage to open, for the 150-seat banquet hall to outgrow its small-town innocence and catapult into the spotlight of an international audience eager to feed its fascination with the growing momentum of the grassroots #RESISTANCE movements across the US, speaking truth to hidebound power in the wake of November’s stunning election outcome.

Six of us – friends, neighbors, fellow PTA moms – had ridden together from the Henrico suburbs to visibly stake our claim to representation during the constantly chaotic, often terrifying opening weeks of arguably the most inept administration since James Buchanan took office.  Armed with a backpack full of school supplies, we captured our wrath in snappy slogans and thoughtful – but pointed – questions on poster boards and index cards.

Minutes before the line was set to start filtering inside, Representative Brat, surrounded by a tight gaggle of videographers and hangers-on, began to make his way up from the end of the line in a succession of campaign-style handshakes and elevator speeches.  As he approached our vantage point, the Bible scholar of our group suddenly announced that she felt compelled to confront Brat on something that had been bothering her more and more each time she heard Dave mention that he went to seminary.

She quelled her nerves and jumped in front of the bright lights to provide Brat the opportunity to demonstrate that his frequently-mentioned seminary degree is more than just a piece of 80lb parchment stock in a nice frame.  Noting the “divide between left and right” in “doing for the least of these,” she asked Brat, “Sir, what have you done for the least of these?”

Brat’s stupefying response centered around how so many more people in China and India have been fed since those countries started applying free market principles.  Because Dave believes that there is no societal, environmental, or economic ailment or injustice that cannot be cured by capitalism and the application of free market principles, Brat actually believes that his Ph.D. and 20 years of teaching economics count as having “devoted his life’s work” (his exact words) to ‘doing for the least of these.’

Brat’s soulless stock answers have long frustrated his constituents, but this example was particularly numbing.  When confronted with scripture, the chest-thumping seminarian demonstrated once and for all that his MDiv is no more than a bullet point on a résumé.  His supposed Christian values are but window dressing, because they never seem to shape his position on any significant issues.

A few days after this encounter, members of the Princeton Theological Seminary faculty authored a letter about the Trump presidency titled, “In Defense of Christian Faith and a Democratic Future.”  In the letter, which is as much an indictment of Brat as it is of Trump, the cosigners state:

“We reject the pervasive aim of placing the monetary gain of wealthy classes over the welfare of its citizenry by undermining education, quality employment, and health care.”

I have not found any public reaction of Brat’s to this letter, but I imagine it would be similar to his response to my friend in Blackstone.

What Would Madison Do?

While Brat might name-drop Princeton Theological Seminary as often as he does James Madison and Adam Smith, don’t be fooled.  Brat is a one-note acolyte of the Free Market Gospel.  As David Morris, co-founder of the Institute for Local Self-Reliance, points out in his article, “Adam Smith vs. Ayn Rand,” even Adam Smith believed in altruism and compassion.  “The flip side of economic self-interest is the interest in the greater good,” Morris writes.  “Without compassion the brutality of the marketplace becomes unconscionable.”  Brat must have read only The Wealth of Nations and overlooked Smith’s other work, The Theory of Moral Sentiments.

While Brat casts aside the Christian ethics described in the Princeton letter when determining his stance on issues, ironically he frequently bemoans the lack of training in ethics in public schools.  Given this paradox, it should be no surprise that when presented with questions rooted in morality, he either deflects to economics or dodges the question altogether.  Brat has been asked by his constituents in multiple online forums how he aligns his Christian values with his support of the morally-bereft Trump and his even-more-despicable advisor, Steve Bannon.  Every time Brat has either deflected with economic double-speak, or dodged the question entirely.  While this past week he did show that he is capable of breaking with Trump on legislation, it was not out of some rediscovered commitment to morality, but because of his obsession with free market austerity.

Brat’s claim that he has devoted his life’s work to the least of his brethren is as absurd as his claim of having “500 constituent meetings” in two years.  His strategy of abandoning his pre-Blackstone rhetoric of touting “over thirty town hall meetings in two years” for the louder, more dubious claim of “500 meetings” during the same period is designed purely to discredit the constituents he has refused to meet with since November’s election.  While Dave’s Facebook page is strategically peppered with pictures that show him happily meeting with constituents, the door appears to be open only if you are a donor, a private Christian school field trip, or a bunch of old white guys in MAGA hats.  Otherwise, you’re lucky to get a brief hallway audience with a staffer.  For the record, $500-a-plate fundraisers and invitation-only events should not count towards accessibility as an elected official.

Brat repeated this unsubstantiated claim – along with ALL his catchphrases and crutch words (right?) – in interviews with MSNBC and Politico last week.  It’s hard enough to take him seriously when he starts off with the ol’ “I’m an economist, not a lawyer” routine, but his ridiculous grinning while being taken to task by Katy Tur, like a naughty schoolboy who has a crush on the stern teacher, was beyond the pale. Katy worked him over good with great aplomb; between this interview and his inane rambling with Politico the day before, Dave’s ill-advised eagerness to be in the media spotlight is tantamount to handing the press the hammer to nail his political coffin shut. 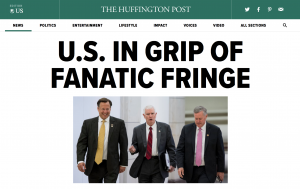 Brat’s media meltdowns aside, it may seem on the surface that the Freedom Caucus members had a great week, what with the emergence of their so-called “defacto veto power,” but ultimately this “fanatic fringe” risks further splintering the Republican Party, and suffering the wrath of their ill-tempered Commander-in-Chief and his revenge fantasies.

Get Out the Midterm Vote

None of us private citizens are Dave Brat’s constituents, not even the Republicans in the 7th District.  Even as a professor, Brat was a conservative shill paid to push an Ayn Rand-based curriculum as chair of the corporate-funded ‘Moral Foundations of Capitalism’ program at Randolph-Macon College (which also received some Koch Brothers money).  Likewise, his primary upset of Eric Cantor owes more to alt-right dark money than his gee-shucks façade would have you believe.  He was not elected to represent us or to craft legislation to improve our condition.  He is an alt-right pawn, used by that faction to get Cantor out of the picture and push ideology favored by big money interests; a pawn with delusions of promotion when his free market principles magically fix everything, despite Dr. Do-Little’s only piece of enacted legislation to date being the renaming of an arboretum.

In a Breitbart interview just hours after his 2014 primary victory, Brat presciently stated:

“Very few politicians are at the beck and call of their constituents. I think one thing we demonstrated very clearly tonight, if you respect the people, they will respect you back in turn. Our politicians, I hope, will see tonight’s event as just a moment of awakening where we begin to pay more attention to the people and their needs instead of the needs of the crony capitalists up in DC.”

YOU CANNOT AFFORD TO SIT OUT THE 2018 MIDTERM ELECTION. All of us, regardless of party affiliation, deserve a representative who actively works for the people, not someone beholden to wealthy masters, making the media rounds and passing judgement on others’ legislation, rather than working to build solutions.  It is imperative that Brat, the Freedom Caucus, the Tea Party, Steve Bannon, the Koch Brothers, and other corporate interests be sent packing from Virginia’s 7th District in 2018.