With just over two months to go until the Democratic primaries for governor and LG on June 13, it’s still not at all clear who’s leading. To date, what we’ve got are a bunch of conflicting signals – all of which can be questioned as to their significance, accuracy, etc. – and not much else. For instance, on the straw poll front, as far as I’m aware Ralph Northam has won all of them: the Mt. Vernon Dems straw poll on March 5 (Northam 179-Perriello 55); the Alexandria Democrats March 12 straw poll (Northam 136-Perriello 76); Rep. Gerry Connolly’s St. Patrick’s Day straw poll (Northam 78%-Perriello 22%); last night’s Arlington Dems Blue Victory Dinner straw poll (Northam 107-Perriello 57); etc.

(Also note that Justin Fairfax has been winning easily in all these straw polls for LG, while the one “real” poll has it Platt 20%-Fairfax 11%-Rossi 6%, but with most Democratic voters not really having any idea who these candidates are).

Do straw polls matter? I think I summed up my views on this subject in this article. I’d add that if straw poll results coincide with other metrics – as in the case of Ed Gillespie, who is not just winning straw polls, but also “real”/”scientific” polls by wide margins all over the state (including in Prince William County, where Corey Stewart is Chairman of the Board!), then…yeah, it probably is indicative of the state of the race. However, if straw poll results conflict with other metrics, then it’s much more questionable whether they mean anything. 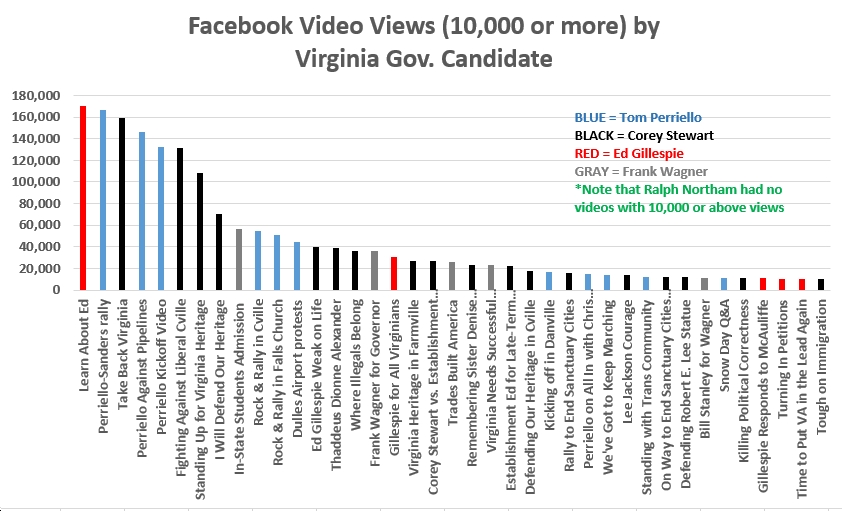 For instance, check out the above graph (click to “embiggen”) of Facebook video views. Note that I cut it off at 10,000 or more to simply to make it a readable graphic.  On the Republican side, while Ed Gillespie has the single-most-viewed video out of the Democratic and Republican gubernatorial candidates, other than that Corey Stewart is basically kicking butt in terms of Facebook video views, with 18 videos at 10,000 or more views, compared to just five for Ed Gillespie and five for Frank Wagner. On the Democratic side, Tom Perriello has 11 videos with 10,000 or more views, while Ralph Northam has none.

Perriello’s most-viewed videos? First is the Perriello-Sanders rally this past Friday, with over 160k views. Next is Perriello’s statement against Dominion Power’s proposed fracked gas pipelines. Then it’s Perriello’s kickoff video with around 130k views. After that, it’s a jump down to Perriello’s “Rock and Rally” events in C-ville and Falls Church, plus Perriello joining protesters at Dulles Airport against Trump’s disgraceful Muslim ban.

On the Republican side, other than the “Learn About Ed” video, the top-viewed videos are dominated by Corey Stewart’s angry, crazy, bigoted, neo-Confederate ouevre: “Take Back Virginia”; “Fighting Against Liberal Charlottesville”; “Standing Up for Virginia Heritage”; “Ed Gillespie Weak on Life”; “Where Illegal Belong”; etc.  Charming, huh? But yeah, that’s what seems to get Republican voters watching, and that’s a scary thought.

Back to the Democrats: I ran the Facebook video stats by the Perriello and Northam folks, and not surprisingly Team Northam pointed to the fact that Facebook video views statistics are problematic. For instance, check out What’s A Video View? On Facebook, Only 3 Seconds Vs. 30 At YouTube (“The major social networks don’t agree on how to count video views; here’s a rundown of the sometimes slippery metric.”) and Facebook Video View Counts Mean Nothing. But Snapchat and YouTube’s Matter. That’s fine, except that if Facebook overstates its video views (presumably for revenue purposes) and that reduces Tom Perriello’s videos over 10,000 views, it would ALSO reduce Ralph Northam’s already-very-low video views as well, right?

The bottom line for me is this metric is just as interesting as straw polls, but in a different way: whereas straw polls tend to measure “insider,” “establishment,” core Democratic committee sentiment, Facebook video views would seem to reflect a more grassroots, broader audience, and possibly intensity as well. Of course, we don’t really know whether these views are coming from Virginians, let alone Virginians who actually vote. Still, ceteris parabis, I’d rather have a lot more video views than fewer.

Finally, when it comes to “real”/”scientific” polls, we don’t have a lot to go on recently (hello Washington Post? Public Policy Polling? Q-Poll? where are you guys?) other than a poll in March (CNU had the Democratic governor’s primary tied at 26%-26%) and some older stuff in February (Quinnipiac University had it tied 19%-19%), with the vast majority of Democratic voters still very much undecided and/or not tuned in yet. Which is partly why things like straw polls, social media followings, online “polls,” etc. are seized on by campaigns to push their narratives – we’re ahead! we’re catching up! we have more intensity than the other guy among! we’re winning among “real people!” So take all of this for what it’s worth, or better yet, focus on where the candidates stand on the issues, what their backgrounds and qualifications are, how well you think they’d do in the general election, and other more substantive metrics than the aforementioned…