The Prince of (Useful) Fools?

With outrages from the Trump administration flooding us daily, it’s easy to forget that Jared Kushner’s attempt to establish a secret back channel with the Kremlin is not the first made public:  On April 3, the Washington Post reported that Blackwater founder Erik Prince had met secretly with a Putin confidant on January 11 in the Seychelles islands (in the Indian Ocean!) to “establish a back-channel line of communication between Moscow and President-elect Donald Trump.”

The meeting was arranged by the United Arab Emirates. The Post notes: “Though the full agenda remains unclear, the UAE agreed to broker the meeting in part to explore whether Russia could be persuaded to curtail its relationship with Iran, including in Syria, a Trump administration objective that would be likely to require major concessions to Moscow on U.S. sanctions.”  Such a result would no doubt be appealing to the Emirates as well, as they have been a US ally in Syria. In addition, it was announced in Defense News on February 20 that Russian defense giant Rostec and the Emirates are cooperating to build a fifth-generation fighter plane, so perhaps the relations between the two countries are thawing.  In any event, the Post points out that the meeting between Prince and the unnamed Russian confidant occurred when “official contacts between members of the incoming Trump administration and the Russian government were under intense scrutiny, both from federal investigators and the press.”  As the Post also notes, Erik Prince gave $250K to Trump’s campaign, to a pro-Trump super PAC, and to the Republican Party and he “was seen in the Trump transition offices in New York in December.”

Prince is connected with the Bannon wing of Trump’s inner circle, as is another administration member implicated in the Trump-Russia collusion: Attorney-General Jeff Sessions, Trump’s earliest supporter in the Senate.  Prince has been featured in numerous Breitbart articles and radio interviews, including this one from September 2016 where, tellingly, he proposes that the US should join with Russia to defeat “Islamic fascism.”

But Prince’s connections to Trump and the Alt-Right hardly stop there.  Prince is the brother of Education Secretary Betsy DeVos and the son of the late Edgar Prince and Elsa Prince Broekhuizen.  Both parents have been members of the secretive Council for National Policy (CNP) and Elsa Prince Broekhuizen has been on its Board of Governors.  Betsy DeVos’s husband, Richard DeVos, is a past CNP president.  The membership of the CNP has included Steve Bannon, Kellyanne Conway, Dave Bossie (President of Citizens United until he joined the Trump Team) and others of the most extremist leaders of the American Right (go HERE for the Southern Poverty Law Center’s chilling analysis and for the 2014 CNP membership directory – the only one available).

Of particular interest to Virginians is the connection of my own congressman, Dave Brat (VA-7), to the Bannon wing of the Trump Administration.  While there is no indication that Brat is directly involved in the Trump-Russia scandal, his ties with the Bannon, Sessions, and CNP circles are sufficiently close that he may have some insider knowledge of it.  Here are some of the connections (see Act One (“The Brat Pack”) of Episode 615 of “This American Life” (“The Beginning of Now”) for more details): 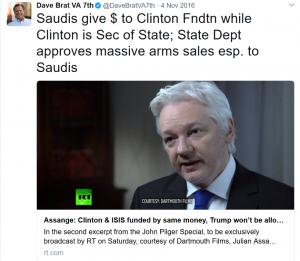 Brat has himself briefly flirted with Russia-inspired smearing of Hillary Clinton, as this Tweet bears witness.  Notice that Brat is citing Julian Assange and Russia Today, the Kremlin-run news outlet that has been publishing Assange regularly and that according to the New York Times, paid Michael Flynn $45,000 to attend a gala in Moscow (where he sat next to Putin) and give a speech.  Note, too, that the Tweet is dated days before the election and expresses Brat’s criticism of a Saudi arms deal negotiated under Obama, though Brat has been silent on the $110 billion deal made last week by Trump.

And speaking of silence:  Brat’s has been deafening.  He has shown zero leadership on the question of Trump’s ties to Russia, offering no analysis from any political or ethical perspective, despite his much-vaunted seminary degree and academic study of ethics.  When asked in a town hall last month about whether he would support the appointment of a special prosecutor he gave the absurd response that audience members needed to bring him evidence first that there was need for such a prosecutor.  Can anyone say “cart before the horse?”

There can be little doubt that the investigation into Trump-Russia imbroglio will go on for a good long while and that we will continue to be inundated and intrigued.  We have not yet learned, for instance, what the content of Jeff Sessions’s meetings with Kislyak were, and perhaps there were other meetings with other Russian officials, bankers, and entrepreneurs which have not even surfaced.  We need to call our representatives to account.  The line has been drawn; let’s see who has the moral courage to put country before party.