So, as Maryland makes a play for the offshore wind crown, Virginia – thanks to dirty Dominion “Global Warming Starts Here!” Power – does essentially nothing to take advantage of this massive potential. How massive? Check out this fact sheet from Oceana, which finds:

Unfortunately, Dominion Power is doing essentially nothing to develop this potential. See this recent article, for instance, which notes that “[t]he relatively shallow waters off the Virginia coast offer some of the best wind power sites in the country,” and that Bureau of Ocean Energy Management (BOEM) auction in 2013 “for nearly 113,000 acres off the Virginia coast for wind energy projects” alone “is expected to generate enough electricity to power 700,000 homes.” But again, Dominion Power – which won the lease – “is proposing, over the next decade, to develop less than one percent of what’s possible on that swath of ocean.”

Needless to say, that is completely unacceptable, and our top elected officials – and candidates for those jobs – need to call out Dominion Power for its deplorable behavior. Refusing any contributions from this rogue, climate-killing, corrupt company would be a good start.

By the way, in addition to losing out to Maryland on the race for the U.S. offshore wind crown, Virginia is also losing out in terms of jobs. As former Virginia Sierra Club head Glen Besa puts it below, “Because of Tom Farrell, Bob Blue and #DomVAPower, Virginia is losing thousands of clean energy jobs.” And for what? So Dominion can keep throwing billions at more fossil fuel boondoggles like its idiotic, close-to-zero-jobs-created, soon-to-be-“stranded assets,” proposed fracked gas pipelines? Why do we allow Dominion Power to get away with this crap? Anyone? 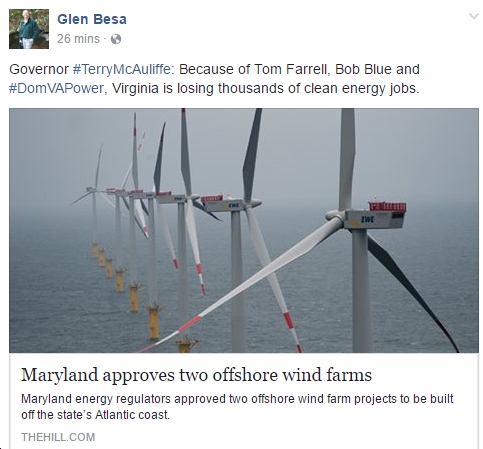 P.S. Also according to Glen Besa, a climate shareholder resolution (which stated that “Dominion does not have a GHG reduction goal, and does not provide information on its long-term strategy or plan to decarbonize in ways that are consistent with the Paris Climate Agreement” and that, “As investors, we are concerned that Dominion is not properly accounting for the risk of its current high investment in carbon-intensive generation“) received 48% of the vote — very close to a majority — at Dominion’s annual shareholder meetings this week in Richmond. In other words, the writing is on the wall for Dominion Power; they either change willingly or they will be forced by their shareholders, the citizens of Virginia, etc. to change.