The latest profile of the Democratic Primary from The New Republic makes me question the validity of the Northam campaign’s assurances that it wants to keep the tone positive and focus on the issues.

While both candidates have agreed to the standard pledge not to attack each other during the primary, it was clear at several town halls I attended that the Northam campaign has adopted a somewhat loose interpretation of the cease-fire. At the Mary Washington event in February, a young woman in the audience asks Perriello about his stance on abortion. As a congressman, Perriello had voted to block federal money from going to abortion providers—a position for which he has since apologized. “You used to say that you were not pro-choice,” the woman says, “and now you are pro-choice.” How could Perriello explain the flip-flop?

“I’ve always been pro-choice,” Perriello replies, practically sighing with exasperation. “I marched for Roe 25 years ago. I had a 100 percent naral rating my second year in Congress and supported funding for Planned Parenthood. After Congress, instead of taking a big lobbying job, I ran a progressive nonprofit organization”—the political action fund at the Center for American Progress—“that was central in fighting back against the war on women.”

I notice that the woman who asked the question is recording Perriello’s responses and carrying a spiral notebook. Assuming she’s a reporter, I approach her after the event and suggest that we compare notes. It turns out, in fact, that she’s an operative for the Northam campaign, dispatched to ask Perriello embarrassing questions about abortion. By early April, Northam had made the issue a centerpiece of his campaign, touting his endorsement by the pro-choice group naral and even holding rallies inside abortion clinics.

Gun control has also been a weak spot for Perriello. As a congressman, he opposed a federal ban on assault weapons and boasted about having an “A” rating from the National Rifle Association. In January, seeking to bolster his progressive bona fides, Perriello called the NRA a “nut-job extremist organization.” The Northam campaign has seized on the issue: At another town hall, I watch as a woman in the audience challenges Perriello about his views on guns. Afterwards, a veteran Democrat who is not affiliated with either campaign tells me that she recognizes the woman as another Northam operative.

Northam’s allies and supporters “have been raising unfair and inaccurate characterizations of Tom’s record for some time now,” says Perriello’s communications director, Ian Sams. “It’s unfortunate that the Northam campaign is allowing that to stand, and in some cases promoting it themselves. We would much prefer it be a positive campaign where both candidates lay out their positive visions for the state and let people decide based on that. But some of his allies and supporters have taken a different tack, and we certainly wish that the lieutenant governor would ask them to knock it off.” Asked about the town hall incidents, the Northam campaign declined to comment.

Those of you following the race on Twitter or watching comments on Facebook are probably familiar with the negative tone from the Northam campaign. Frequently, Northam surrogates will push out downright lies and misrepresentations about Perriello’s record, knowing that a lie told enough times can be perceived as true. Despite both candidates having a less than perfect record on gun control, Northam’s campaign has waved away questions about his past votes and ducked addressing them at debates. But this hasn’t stopped the Northam campaign from acting as if Perriello’s views haven’t evolved since 2010, a time in which we still had Virginia Democrats like our own Senator, Mark Warner, working closely with the NRA. We’ve seen a similar tactic on abortion, where the rhetoric from the Northam campaign makes me question how he’s able to tolerate Catholic Tim Kaine in the Democratic Party.

The endorsement of Sanders, who was crushed in the Virginia presidential primary by the establishment-backed Clinton? “That’s worth two votes,” Saslaw retorts. 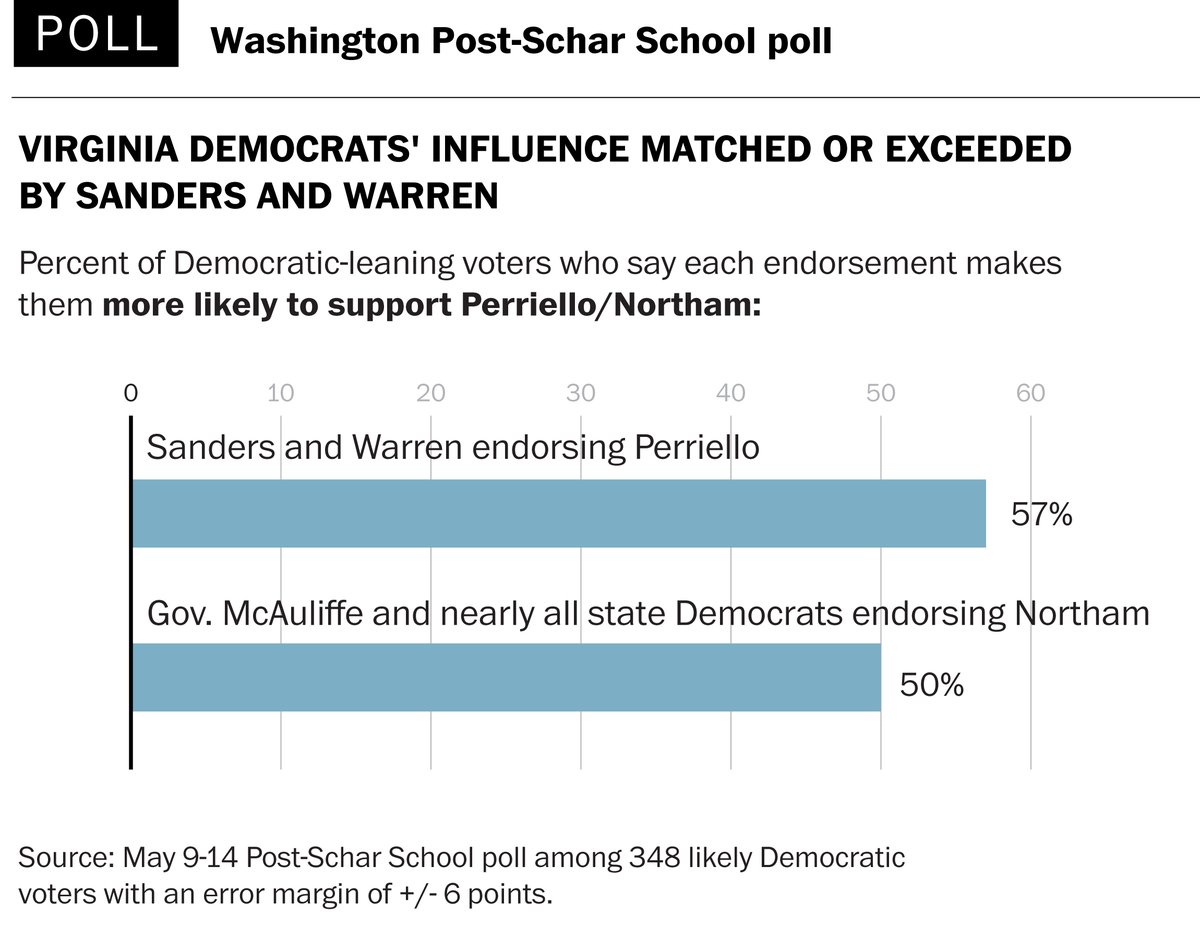 These negative attacks started from day one, with Northam surrogates like Dick Saslaw and Terry McAuliffe going out of their way to personally insult Perriello. I’m reminded more and more of the tone of the 2009 primary, and more than one Democratic activist has pointed out to me that they feel like Northam is following the Brian Moran playbook of trying to tear down his opposition. (Although to be fair one was a former Moran staffer who defended those negative tactics and, not surprisingly, strongly supports Northam.)

With Perriello and Northam essentially tied, the remaining weeks are likely to turn even uglier. This was predicted all along, that unlike early claims that Perriello would never come close to Northam, the energy and enthusiasm for a strongly progressive vision for Virginia’s future would make the race competitive.

“That’s sheer f—ing fantasy. If he had Mike Bloomberg’s money, maybe he could make it happen. But this whole thing is a joke. Ralph will win this thing by 30 or 40 percent.”- Senator Dick Saslaw

The desperation is going to open the door to the Northam campaign making some serious mistakes. Their surrogates feel pressured, just this weekend State Senator Scott Surovell posted an analysis of Google Trends for the primary to try to argue that Northam had more momentum. The only problem was that he misspelled Perriello as Periello. The fact is this metric, which probably is still meaningless, favors Perriello. These sorts of little missteps can add up in a close primary, and we’ve already seen similar mistakes from Northam’s campaign staff on Perriello’s voting record, the role of the Governor in overseeing the pipelines, and even basic facts regarding campaign news coverage.

But Sherwood didn’t say that.

Sherwood contacted the Northam campaign when he saw the mischaracterization.

The Northam campaign issued a corrected news release that said “the earlier subject line was not intended to mischaracterize the views of Tom Sherwood. It should have read ‘many believe’ Northam’s progressive record is ‘just right’ for Virginia.”

Sherwood said via email that he appreciated the quick correction by the campaign. “I value my integrity as a reporter and analyst,” he wrote.

“We literally miswrote a subject line,” Turner wrote. “I don’t get how that is news. Y’all issue corrections all the time I’m sure.”

Turner’s flippant attitude towards mistakes reminds me of Northam’s own response to criticism. He doesn’t recall the bad votes he’s taken, assuring the audience that the claim may be exaggerated. Disagreements with his policy proposals are pivoted to being personal attacks on his service to the country. And he never, ever admits that he almost handed control of the State Senate to the GOP.

As Ben Tribbett wrote during the 2013 LG Primary:

Ralph Northam has been a good member of the Virginia Senate on most issues, and is an excellent fit for his eastern shore/Norfolk based district.  Can he appeal statewide?  I think he could- but only with a very good campaign.  Northam has not had that so far this year, he’s been playing catch up from day one.  Good campaigns require good leadership from the candidates and Northam has not provided that.

When I spoke to Northam earlier this year I told him that I was concerned with his near party switch in 2009.  He told me it was a “mistake” and I was impressed with his willingness to own up to the mistake and move forward.  However, when this issue recently resurfaced, his campaign denied it ever happened, calling it a “Republican pipe dream“.  That is completely and totally false.  Here’s the real story of what happened.

Judges are picked by the General Assembly in Virginia.  After years of being shut out of the process in Hampton Roads, Senator Yvonne Miller had some judicial candidates she wanted to push after Democrats retook the Senate in 2007.  Miller specifically wanted to add some diversity to some judicial benches that had none.  Northam, then a new Senator preferred some of the same candidates backed by local GOP Senators Ken Stolle and Tommy Norment.  When Northam stepped out against Miller– the Senior Senator from Norfolk- she had funds to his hospital cut in the budget.  Northam went into a rage and came to an agreement with Stolle and Norment to pull a surprise resolution on the floor of the Senate to reorganize the Senate, giving the GOP control of some committees and Democrats control of others.  Basically what Northam tried to pull was what Virgil Goode did in 1995.

What makes the Northam campaign version of this story so galling is this did not all happen behind the scenes.  When Democrats learned of this secret plan to reorganize the Senate they adjourned and went into a caucus meeting where Northam told them of his plans and made various leaders publicly plead with him to remain a Democrat.  This is no secret- it happened in front of every single Democratic Senator at the time.  Northam was then called into Governor Kaine’s office where Kaine pledged to restore the hospital funding and Northam backed down.

This story should make anyone very nervous about Northam breaking 20-20 ties in the Virginia Senate.  Northam’s original answer that admitted responsibility was the best response to this.  The new answer that denies it ever happened is a fraud.

As Jesse Jackson said during his bids for the presidency, “Leaders must be tough enough to fight, tender enough to cry, human enough to make mistakes, humble enough to admit them, strong enough to absorb the pain, and resilient enough to bounce back and keep on moving.”

Northam seems incapable of admitting that he’s made mistakes in the past. That’s a worrying trait for someone who’s watching his ascendancy to the Governorship slip away. The next few weeks are going to get ugly.