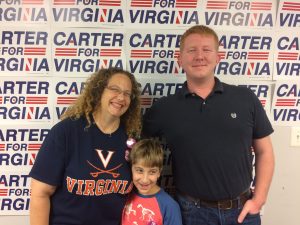 It’s interesting that we have this two-party system in America, yet I’m finding that so many people consider themselves Independent. And Independent doesn’t mean they agree with the Democratic Party on certain issues and the Republican Party on others. Mostly, it means that they don’t consider either side able to accomplish much of anything, that they’re sick and tired of the partisan fighting, and that they would be willing to vote for either side, depending on the candidate.

That was the case for the voters that Lee Carter and I spoke to while out canvassing in the city of Manassas this weekend. We spoke to one woman who informed us right off the bat that she doesn’t follow politics, doesn’t have time for that kind of thing. She’s busy with her family and her job and just keeping her life together. But yet, as we stood talking, she revealed a whole lot more that she did think about politics.

Like many people I’ve talked to, health care was her number one issue, with an elderly mother needing health care. She thought that Trump wasn’t really to blame for any of the problems we have in America any more than Obama was–it’s just that the person at the top takes all the blame. She couldn’t understand why we were fighting over monuments when we have so many real problems to fix in the country. She wished we could go back to the days of Reagan, or even JFK, who “actually cared and were willing to get their hands dirty to fix things.” I think this was quite some revisionist history on her part, because neither Reagan nor JFK was exactly known for rolling up their sleeves and getting to work.

But the point is, this is the impression that a whole lot of people, especially Independent voters, have about our political leaders today. That neither the Republicans nor the Democrats work for them. And Lee may have tried to convince her that he got into this race to serve the people in his district and to fix the problems he saw, but in this case, the word Democrat on his information handout was an albatross around his neck. She said she’d think about it, and do her research when the election was closer, but, who knows?

The next voter we talked to was another Independent voter, also concerned about health care, with a wife suffering from breast cancer, and overdue bills that the insurance company couldn’t seem to decide whether to pay or not. He was far less generous to Trump, repeatedly calling him a “whack job,” and saying that people who voted for him needed psychiatric help.

Nevertheless, it was clear that he was an Independent not because he was socially liberal and fiscally conservative or the reverse, but rather because he didn’t think either side was doing anything helpful. But, in his case, he was pretty clear on why–money in politics. He thought people voted for Trump because they thought he was the anti-politician, and that he was beholden to no one because his money all came from small donations. He was thrilled to learn that Lee has committed to not taking any money from corporations. He said normally the “D” on Lee’s handout would turn him off. But not only did Lee earn his vote, he wanted to tell all his friends, and wanted a yard sign–which he said all his neighbors would really take as an endorsement, because they know what his political leanings are.

It’s been interesting to watch these candidates for the House of Delegates struggle with their party affiliation, struggle with the strategy of whether to overtly state what party they belong to. It’s not a question of them not having progressive enough values, or trying to pander to conservatives. It’s a question of a label, and whether that label has somehow become tainted. It’s up to our political leaders, from the top to the bottom, nationally and locally, to work on repairing the image of the Democratic Party.