The Bosnian-American Texan wearing the red shirt and keffiyeh around his neck maintained his composure despite the white shirt militia insisting that he in fact is not Muslim. Turns out these fellows are ethnic bloodhounds. “You’re a Jew … I can tell by the schnoz,” one white shirt excitedly alleged.

When force was not being countered by force in Charlottesville, this was the kind of discourse occurring between the alternative camps. Most of the counter-protesters who followed the alt-right rabble to McIntyre Park were distinguishable by any lack of coherent leadership or organization and most were singled out and intimidated into departing.

While there was significant hyperactivity after the groups were influenced to leave the city center and began to assemble at the park (the media swarmed the location) no activity of substance materialized. 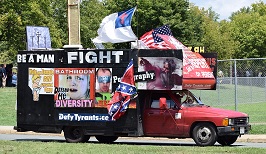 Rumors of speeches and meetings dissolved into restless boredom. When a report circulated that the police were coming to clear the park, many in the crowd fled to their cars and drove away. One grotesquely festooned truck with the slogan “BE A MAN FIGHT” was the very first to flee.

What were very noticeable were the multi-passenger white vans bearing New York plates being used to transport the white polo shirt and khaki pant uniformed militia in what were probably intended to be armed teams of some sort but more resembled undisciplined gaggles of school boys. The drivers and what looked to be a completely frustrated coordinator employed walkie talkies and screamed code words at each other loud enough to be heard over the crowd.

There were no signs of the Antifa at McIntyre. In fact, the counter-protesters who did appear did little more than express indignation that the militia was flaunting their Virginia open-carry rights. Much the opposite of the new face of the left, they shrunk from confrontation.

Except for the Muslim fellow from Texas. He asks a pretty simple question. I’d add to that: Does your mother know where you are?