“Indeed, the panic of white slavery lives on in our politics today. Black workers suffer because it was and is our lot. But when white workers suffer, something in nature has gone awry. And so an opioid epidemic among mostly white people is greeted with calls for compassion and treatment, as all epidemics should be, while a crack epidemic among mostly black people is greeted with scorn and mandatory minimums. Sympathetic op‑ed columns and articles are devoted to the plight of working-class whites when their life expectancy plummets to levels that, for blacks, society has simply accepted as normal. White slavery is sin. Nigger slavery is natural. This dynamic serves a very real purpose: the consistent awarding of grievance and moral high ground to that class of workers which, by the bonds of whiteness, stands closest to America’s aristocratic class.” – Ta-Nehisi Coates, The First White President

Rural Virginia is home to pain and hardship, communities where generation after generation has toiled in poverty and have been unable to achieve the American Dream. Despite a poverty rate below the national average, parts of Virginia see almost twice the state’s poverty rate. 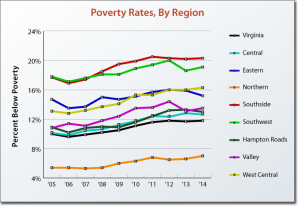 On the one hand, Southwest Virginia’s hardships are well known in political circles. Not a week goes by that the Roanoke Times isn’t bemoaning how the rest of the state is ignoring this suffering region. Recently, the Roanoke Times criticized Virginia’s Democrats for turning their backs on rural voters.

“For some time now, many Democrats have effectively written off rural voters.”

Surprisingly, the paper has the audacity to quote former Virginia Congressman Rick Boucher, cast out in 2010 not because he stopped showing up in his rural district, but because of his association with the first black President and support for climate change legislation. Who turned their backs on whom?

The economic hardship of Southwest Virginia is seen as a plight that must be addressed, alongside the opioid epidemic that casts struggling, working class rural communities in a sympathetic light. It’s not their fault.

When’s the last time Virginia’s newspapers have treated Southside Virginia with such concern?

From Halifax in the west to Greensville in the east, from Brunswick to Buckingham, Southside Virginia shares the economic challenges of the Southwest, but with a key difference. Many of the faces of its poor are black.

The Roanoke Times would like to speak for all rural voters, but it doesn’t. Worse, it also reinforces the narrative that only rural, white voters are suffering, while the urban crescent of Virginia is thriving. There’s poverty across the urban crescent, it just often doesn’t look the same as that in Southwest Virginia. Richmond’s child poverty rate is twice the state average.

On the infamous Labor Day in which the Roanoke Times believes Democrats abandoned rural Virginia, Northam attended Congressman Bobby Scott’s 41st annual Labor Day picnic. It’s another long standing tradition in Virginia politics, but for some reason the Roanoke Times isn’t as sympathetic to the traditions that it represents.