This is truly appalling (see Danica Roem’s explanation about the push poll, which I’ve also included below), even by anti-LGBT bigot and extremist Del. “Sideshow Bob” Marshall’s low, low “standards.” By the way, the people who put this nasty push poll together, the Washington, DC-based American Principles Project, don’t even know that in Virginia, we call it the “House of Delegates,” not the “House of Representatives.” Bigots AND morons – great combo, eh?

Attached is a copy of the push-poll robocall paid for by the Washington, D.C.-based American Principles Project, a group supporting Del. Bob Marshall (R-13) even without officially endorsing him, that attacks transgender children as well as me with blatant BS.

A 13th District resident sent me the audio clip this afternoon, four days after the robocall went into the field on Sunday.

It’s amazing how Del. Bob Marshall lacked the courage to debate me yet found enough faux bravery to condone his allies bullying transgender children when he’s a 13-term delegate.

Notice that the robocall doesn’t attack me for my policies about fixing Route 28, bringing high-paying jobs to Innovation Park, filling the office vacancies along Manassas Drive in Manassas Park, finding a cost-effective way to extend the Virginia Railway Express out to Innovation Park and Gainesville, raising teacher pay in Prince William County and Manassas Park so it’s not the lowest in Northern Virginia, expanding Medicaid to cover 3,700 uninsured constituents of the 13th District who earn up to 138 percent of the federal poverty line, fighting Dominion Energy’s proposed power towers in Gainesville and Haymarket, or anything of substance.

Simply put, they’re just following Del. Marshall’s lead of hiding behind BS instead of discussing the issues. Listen for yourself: http://wvtf.org/post/northern-virginia-race-pits-transgender-candidate-against-conservative-delegate

It’s the same sort of fear-mongering Del. Marshall pushed in a taxpayer-funded letter to constituents in April this year (see attached) and in speeches in front of the Prince William County School Board as he tried and failed to prevent the School Board from protecting LGBTQ students, faculty and teachers in the non-discrimination policy.

And it’s the same sort of nonsense Del. Marshall used to attack capable, ready and patriotic members of the military who are transgender when he endorsed President Trump’s discriminatory proposal to ban transgender people from serving in the military and to cover their health care needs.

I’m running for delegate to replace traffic lights with overpasses along Route 28 in Centreville and at Orchard Bridge Drive in Yorkshire after 26 years of neglect from Del. Marshall, whose legislative priority this year was focused on where I use the restroom (HB 1612 was the only one of his 15 House Bills for which he lined up multiple cosponsors) than how his constituents get to work.

Simply put, I’m running to build up our infrastructure, not tear down each other, so we can make Virginia a more inclusive commonwealth where we welcome you and celebrate you for who you are, not for what anti-LGBTQ politicians like Del. Bob Marshall tell you you’re supposed to be. 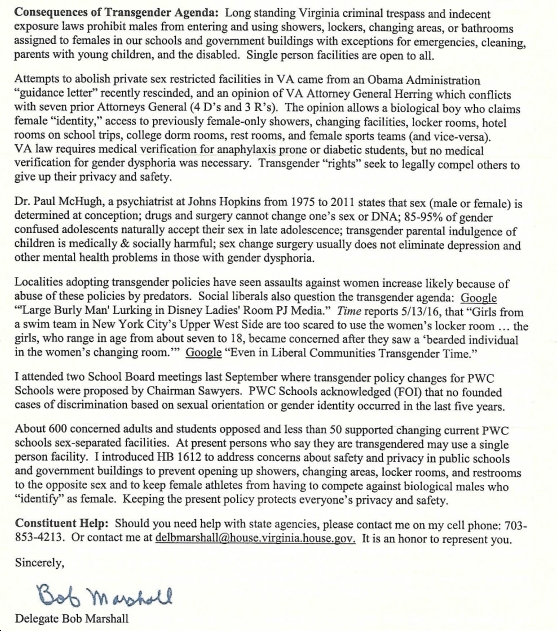