I wouldn’t say that Carly Fiorina calling Virginia GOP Lt. Governor nominee Jill Vogel “Kim Vogel” is a huge deal in and of itself, but with 28 days to go, I do wonder how many Virginia voters know who the candidates, let alone much about those candidates. It’s also interesting that a politico like Fiorina, who seriously considered running for U.S. Senate next year against Tim Kaine, doesn’t seem to know Jill Vogel’s name. She also is, of course, completely wrong that Virginia would be better off with Ed Gilllespie as Governor and Jill (not Kim) Vogel as Lt. Governor. Anyway, let’s just make sure that in four weeks, we don’t give Fiorina and her fellow Virginia Republicans – or Democrats for that matter – any reason to remember Jill-Not-Kim Vogel’s name or mention it ever again for statewide office. 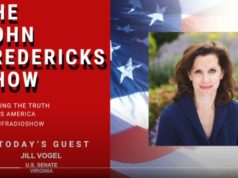