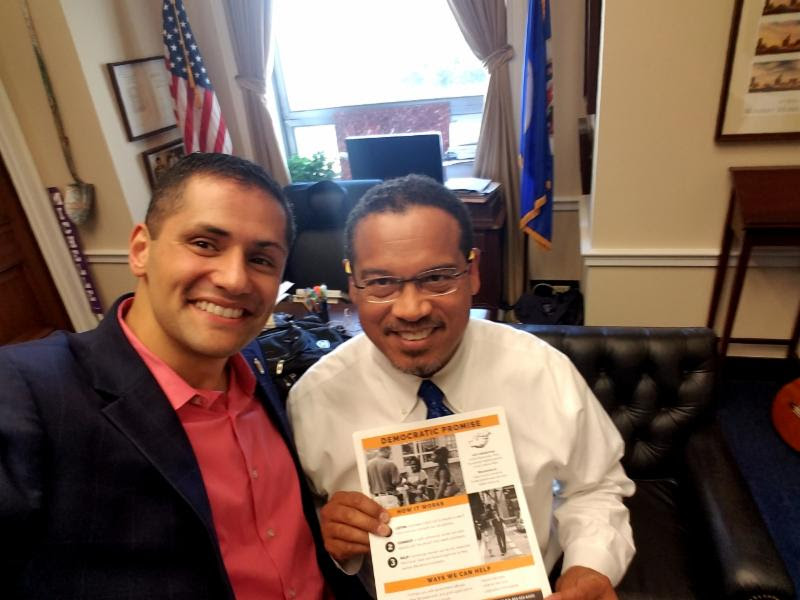 ROANOKE VA – Congressman Keith Ellison, Deputy Chair of the Democratic National Committee, endorsed Democratic Promise, a new initiative rebuilding trust in the Democratic Party in rural Virginia.
“What we as Democrats must do is simple,” said Ellison “Build relationships. Be a voice for voters. Follow through with our promises.” Deputy Chair Ellison referenced the radical impact Democratic Promise can have on rural America, stating “…we are the Party of the People, and this initiative is the foundation on which we will rebuild the trust of those we aim to serve.”
Democratic Promise launched one month ago from the office of Delegate Sam Rasoul in Roanoke, Virginia. The initiative is built as a tool to proactively reach constituents regardless of party affiliation, listen to their concerns and connect them with resources to resolve any problems.
Over its first month, Democratic Promise launched in rural Floyd and Tazewell, Virginia, and has reached over one thousand residents to see if they need help. In doing so, Democratic Promise earned the support of the Rural Caucus of the Democratic Party of Virginia and many other statewide political groups.  www.DemPromise.com

Audio: More Theories – a “Coalition of the Unhappy?” – on What Precipitated the Ouster of VA House Dems Leader Eileen Filler-Corn