One patient’s story of Ralph’s compassion 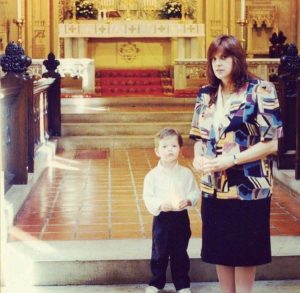 According to Norfolk native Ian Stearns, the world could use many more Dr. Northams.

From as young as six years old, Ian started getting headaches — not just bad headaches, but migraines. Growing up with a single mom who suffers from Lupus, he described most of his childhood as an uphill climb. Ian’s mother’s disability meant they only received medical insurance through Medicare. When Ian started getting incredibly painful, routine headaches, he was told by his primary pediatrician that he needed to see a specialist. But with only Medicare, this proved to be an obstacle to the treatment he needed.

“My mom spent a lot of time going through the phone book looking for a specialist. I can’t tell you how many times you went to a doctor and they said they wouldn’t accept our insurance. It felt like we were knocking on every door — and the only person who welcomed us with open arms was Dr. Northam.”

The remedy for Ian’s migraines was relatively simple — he would take a prescription strength ibuprofen when he felt a headache coming on, and most days, that was enough to ward off the pain. After going to primary care doctors who’d minimize his sickness and diagnose his migraines as something he’d eventually grow out of, he was grateful Ralph took the time to examine his symptoms in their entirety and treat him despite the type of insurance he had.

“I remember — he had a white lab coat on and a stethoscope around his neck, and he crouched down to my level, looked me in the eyes, and said, ‘I know you’re really scared right now, but you don’t have to be.’ After being in pain for months, he basically took all my fear and worry away. That really stuck with me.”

Thankfully, Ian grew out of the migraines. He went on to study theater and dance at Virginia Commonwealth University and currently works at a women’s health advocacy organization. When it comes to healthcare, Ian’s concerned with the decisions made by the Trump administration. He trusts Ralph because of his background as a doctor — someone who can make informed, thoughtful decisions and facilitate the best care for folks in the commonwealth. Ian recognizes that oftentimes, politicians talk about healthcare and reproductive health as separate subjects, and he appreciates that Ralph has been an advocate for Virginia women who considers reproductive health part as healthcare for all.

“He wasn’t going to let a 6- or 7-year-old-boy who was terrified leave his office without helping him, no matter what insurance we had. It’s reassuring to have Dr. Northams in the world who didn’t go to school to learn how to govern, but are the kinds of people you want making those decisions, who have a clear conscience that guides them.”