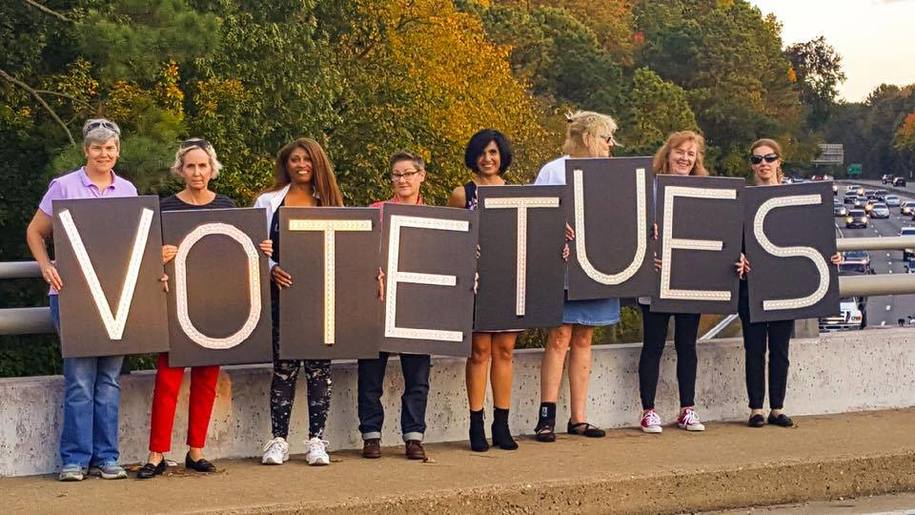 Regardless of the Party origins, Democrats today by and large support Progressive values, which at its core means valuing human dignity and worth. As such, we are united in our position against using race, ethnicity, gender, sexual orientation, and religion to instill fear and distrust in people in order to sway elections. The leaders vying for Virginia’s 7th Congressional District Democratic nomination stand together in condemning the dog-whistle politics being used by the Virginia Republican Party to support many of their candidates, such as Ed Gillespie, Eddie Whitlock, and Bob Witte. People must vote en masse on Tuesday, Nov. 7 as a referendum against hate.

One of the most glaring, deceptive, divisive campaigns has been against former Marine Corps officer and leadership expert Courtney Lynch, who is running for Henrico Board of Supervisor (mailers below). The VA GOP has used racial fears and even truncated quotes from a fake Facebook account of an elderly African American woman to peddle lies about Lynch. Michael Paul William’s article “Henrico and the region not served by deceptive, divisive politics” in the Richmond Times Dispatch provides an excellent commentary on why this strategy is so dangerous. I believe it is why people who consider themselves conservative—whether socially or fiscally—have to question whether today’s Republican values really represent their values and whether they trust men who are willing to win using lies are able to honestly serve.

It is not enough that Democrats stand together on this issue. We need leadership across from both sides of the aisle to join together in condemning racially divisive politics. Virginia’s 7th Congressional District is increasingly diverse—especially in Henrico County—and we must trust that leaders like Representative Dave Brat will: 1) not be bullies; 2) stand up to bullies; and 3) represent minority voices as strongly as they would their donors’ voices. In a time when money clearly buys time, access, and influence, we have to slow down and bring diverse voices together at a table and really consider a representative sample of a district when making decisions.

So far, Rep. Brat has done a good job appearing across the 7th District for photo opportunities, but sit downs for dialogue has been largely limited to realtors, investors, bankers, business owners, doctors, and donors. Rep. Brat, VA’s 7th District Concerned Citizens encourage you to reflect on the diversity in your district and invite their voices to the table and listen to their concerns while considering legislation. As a former ethics professor, we are confident that you value diversity and will reject the VA GOP’s use of negativity, race-baiting, fear-mongering, and lies to influence elections this year and next.

I am proud to support Courtney for Supervisor. Courtney is a former Marine Corps officer, a small business owner, an author, and parent running in the Brookland district of Henrico County to serve the people in her district and across Henrico. From the day she announced back on a snowy day this past winter, it has been my privilege to watch Courtney campaign and advocate for our community. Courtney has remained focused on communicating who she is and her vision for growth in Henrico.

As her opponent and the opposing party have begun directing attacks, some of which have been reported in local media because of the dishonest tactics, she has remained focused on serving our community. She is a principled leader, a good friend, and the type of Supervisor we need in Henrico.

As a fellow Marine and Democrat, I’m proud to support Courtney for Supervisor‘s campaign for Henrico County Supervisor. Courtney is a mom, a former Marine, and a successful businesswoman. Henrico, and Virginia as a whole, will be better off with more public servants with her kind of values.

Values are important when it comes to choosing our elected officials. They shape the kind of policies they pursue in office and the kind of campaigns they run. I mention this because the political attacks coming from Lynch’s opponent have no place here in Virginia.

Racist, dog-whistle politics have become the norm at the federal and state level and it’s disheartening, but not surprising, to see it filtering down to our local elections as well. We’ve seen the harm this kind of politics has done to our political discourse, our ability to compromise and work together.

I want to share these words from Richmond Times-Dispatch columnist Michael Paul Williams: “The overtly partisan politics of Washington and Richmond’s Capitol Square have no place on the local level in a region in dire need of teamwork to address local problems and score wins on the national stage. (You think Amazon, etc. aren’t taking notes?) These campaign fliers have the potential to ratchet up tensions on the Henrico board and beyond.”

His words ring true for elections at all levels. When you see these kinds of political attacks, pay attention to where they come from and remember to hold those responsible accountable.

Semper Fi, Courtney. This fellow Marine is rooting for you.

As a fellow Democrat, current candidate for Congress in the 7th District, I am utterly ashamed and fully renounce the tactics that the Republican Party has taken various election cycles and this one is no different. At every level of government Republicans manipulate voters by instilling fear, race baiting, and fabricating lies. Even going as far as creating a FALSE Facebook account to gain votes in a county race from a demographic that iscontinuously neglected. How can anyone trust a PUBLIC SERVANT with the privilege of their vote and/or their livelihood,, upon gaining office, if you can not run a fair and honest campaign? Any person that chooses to represent ALL of us, at any level of government, should have undenying integrity, should they not? Even in recent months, my opponent, Rep. Dave Brat and his party affiliates have not shown any integrity or loyalty to the Virginians they represent. I challenge Dave Brat and the GOP of Virginia to actually run a CLEAN campaign, allow anHONEST election process to take place, and put Lee Atwater’s dirty old tricks to rest permanently.