Earlier today, DPVA Vice Chair for Rules Marc Broklawski posted: “If anyone knows the whereabouts of Greg Riddlemoser, Stafford County Registrar, let me know. Instead of making sure that any servicemembers ballots are counted and providing the provisional ballot logs that he’s now (and previously) been directed to provide (and all other localities have provided), he has decided to go into hiding. Why is Greg going to such lengths if he has nothing to hide? If he refuses to fulfill his duties, the Electoral Board should fire him and get someone that will. This is ridiculous. This is how I’ve been spending the last 72 hours.” Meanwhile, as you can see below, people have been pounding the Stafford County Registrar’s Twitter account, demanding that the military ballots be counted. The response of Stafford County’s (Republican) Registrar?  Apparently, to not just “go into hiding” but to take down the Registrar’s Office’s social media accounts. See below…crazy, huh?  For a lot more detail on this story, click here. 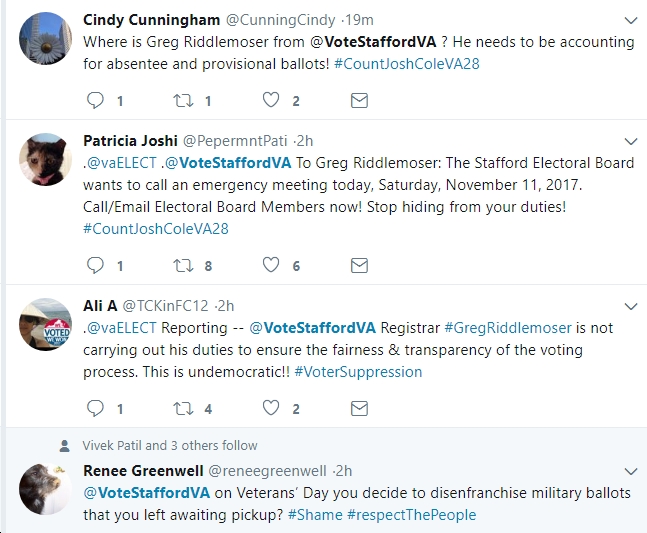