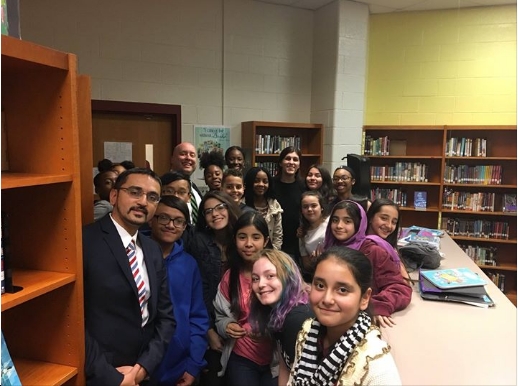 On Sunday, I had a chance to sit down with Marine Corps veteran, teacher, community leader and proud Muslim American Atif Qarni, who Gov.-elect Ralph Northam announced this past Thursday as his pick for Virginia Secretary of Education.  Here are the highlights from our discussion, at Silver Diner in Arlington, condensed for readability. Oh, and best of luck to Atif in his new job; I’m confident he’s going to do great!

How will having been a teacher for many years inform Atif’s approach to being Virginia Secretary of Education?

Atif Qarni: My background as a teacher is the most valuable thing for this job, because having that field expertise, that “field PhD,” is so critical….you know, thousands of teachers in the Commonwealth were hoping for [a teacher as Secretary of Education]; VEA was aggressively pushing for it. As a matter of fact, as soon as the nomination was announced, I have gotten dozens of Facebook messages, emails…dozens of teachers across the Commonwealth are super excited.

Literally, the other day you were working as a teacher, then Ralph Northam came to name you Secretary of Education, and after that you went right back to work.

Atif Qarni: On Thursday, I was literally teaching, then afterwards I went back to my last period, finished it up, then I had detention duty…My principal was like, you don’t have to do detention duty, and I said no no, I’m going to finish it out. I’m sitting in detention and I had students from high school come…former students…to hang out with the detention kids. And then Delegate Plum – he’s a former teacher – the most senior member [of the Virginia House of Delegates], he came to congratulate me…

Being a K-12 classroom teacher brings something unique to this job?

Atif Qarni: I think the field expertise and perspective is going to be critical.  A lot of educators, teachers, counselors, etc. have already started to reach out to me…They’re invested now…this has given them hope that one of our own is in this position and they’re ready to work, they’re like what can I do to help? Folks are already asking can we do focus groups, policy sessions…I really would like to travel the Commonwealth as much as possible; I don’t feel that I’m gonna do my job well the time sitting in the office. I really want to travel, get to know every corner of the Commonwealth, talk to people, engage them, really get really get them invested, talk to…everybody, all stakeholders; I really want to be out there on the road as much as possible.

Before working as a teacher for 10 years, what did you do?

Atif Qarni: I was in the Marines, deployed overseas…in Iraq. I was also, before that, a litigation paralegal for 8 years. I joined the Marines right after High School, did my basic training, was in the reserves, then did some active duty when I was deployed [to Iraq]. Everything I’ve done – being in the Marines, working for a major law firm, being a teacher – all those experiences that I’ve gained are going to add a lot of value in running a big agency with an $18 billion budget.  As far as the Marine Corps are concerned, those leadership skills of working through challenging situations are very important…My job is to work with/listen to [experienced Department of Education employees’] expert advice, look at what the Governor-elect’s agenda is and try to facilitate the policies…making small adjustments here and there can have really big impacts in the classroom…
In the Marines, you dealt with a very diverse group of people, how did that shape your approach?
Atif Qarni: Some of my best friends were from all walks of life, all over the country, then getting deployed, interacting with a different culture, different languages…really understanding people, getting a “people PhD.”
Prince William County is also extremely diverse…how might that diversity inform your approach to the Secretary of Education job? 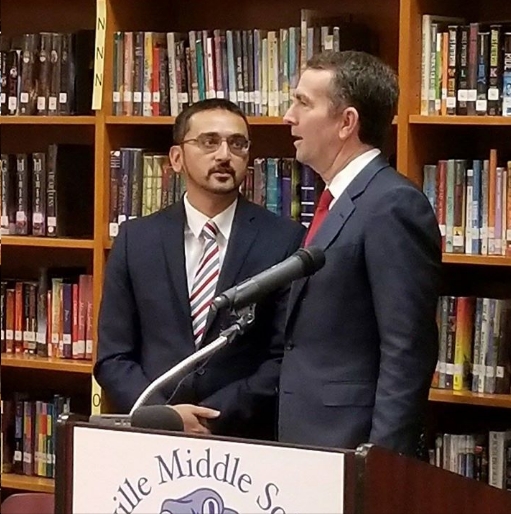 Atif Qarni: I’m excited for this opportunity, it’s going to be a great four years. I just want folks to understand is that my goal is to make Virginia a model…Ralph Northam is really passionate about this, his wife is a school teacher, he’s very very serious [about education]. It was significant [that Northam announced his Secretary of Education pick at a public Middle School], he was sending a statement regarding how serious he is about this…[he announced it] right before Christmas break, the last announcement right before that…I know that there are a lot of high expectations and I plan to work hard. I want to make all of Virginia proud, in all parts – rural, urban, everywhere. I’m going to work 24/7 on this, live and breathe it…I’m doing a lot of reading already to study different models of
what’s worked where globally, locally, nationally… I want to connect all different school
divisions to get them to communicate with each other, to see what is actually working…We want them to try things…sometimes you might fail, but you try and you never surrender…I’m very grateful for the governor for giving me this opportunity. And four years from now, I’ll show you where we are in Virginia and I’ll show you the data four years from now…I’m going to hit the ground running.
There's no paywall on Blue Virginia, and we definitely want to keep it that way! If you want to help support our work, you can donate here - thanks! Also, you can sign up for our weekly email list here.