A sure applause line for Virginia Democrats is to rail against gerrymandering, blame it for most/all of our problems in the Virginia House Delegates, and vow to do something about it. Yet for years, I’ve argued that a FAR bigger problem than gerrymandering is that Democratic voter “dropoff” from presidential years to “odd-year” Virginia elections is far, far greater than Republican voter “dropoff.” Now, VPAP has two graphics (see below) that visually demonstrate what I’ve been talking about. To me, the two key takeaways here are: 1) Democratic “voter retention” went from a pathetic 57.82% in 2013 to a MUCH more impressive 72.59% in 2017 — an increase of 15 percentage points, corresponding to a huge increase in the number of Democratic voters (~1.4 million in 2017 vs. ~1.1 million in 2013); 2) Republican “voter retention” actually increased a bit between 2013 and 2017, but only a bit, from 64.51% in 2013 to 68.63% in 2017; 3) the massive increase in Democratic voters in 2017 vs. 2013 completely overwhelmed the much smaller increase in GOP turnout, both at the statewide level and also in the House of Delegates districts.

The end results of these trends was a Democratic statewide sweep on November 7, plus an eye-popping pickup of 15 or 16 House of Delegates seats (all districts won by Hillary Clinton but held by Republicans prior to November 7, 2017). And why did this happen? I’d say a huge percentage of it (90%?) was due to anti-Trump backlash, which means that the challenge for Democrats going forward will be to figure out how to maintain 2017 levels of “voter retention” once the Orange Gropenfuhrer is nothing but a (very) bad memory…

P.S. Just to be 100% clear, I strongly support non-partisan redistricting and certainly believe that gerrymandering is a problem…just not the biggest part of the problem compared to Democratic voter retention struggles pre-Trump. 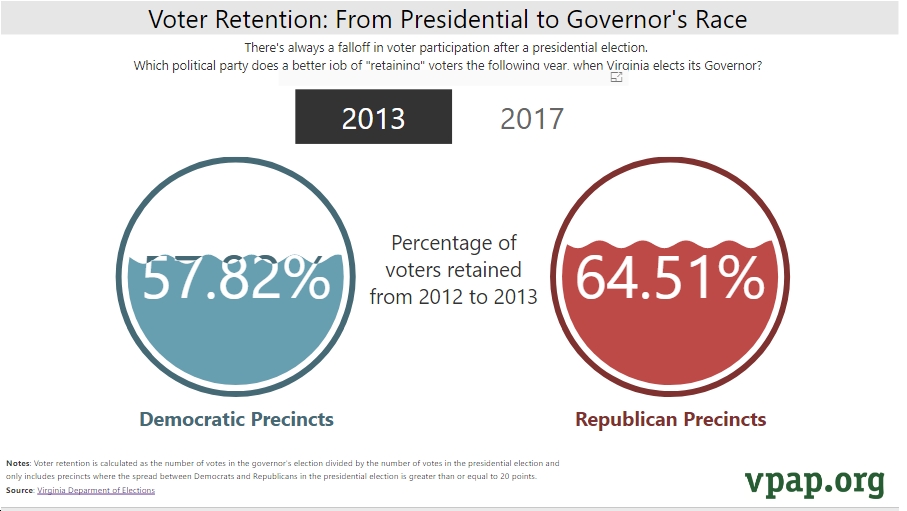 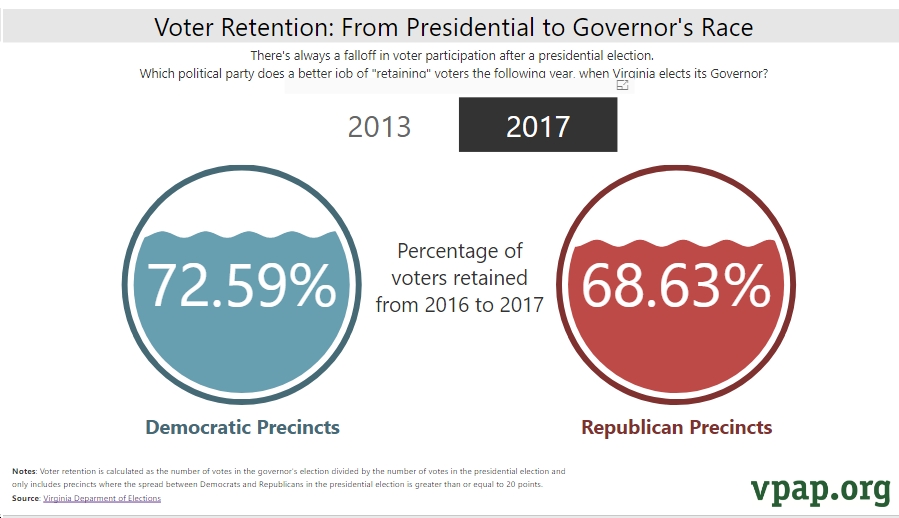