The one thing we know with certainty about those people who voted for Donald Trump for president, and of those who continue to support him – after all the other variables such as wealth, race, age, gender, party affiliation, social status,  geography, marital status, parent or non-parent, etc. have been taken into account and weighed/discounted – is that the one common denominator those supporters share is an inclination toward authoritarianism.

If there is any dispute about the above statements, it is an argument without factual basis.

Poll after poll has found that authoritarian leanings typify those who believe Trump is capable of leadership; capable of captaining the Ship of State — even though, relatively speaking, he’s a landlubber without sea legs nor any time at the political helm. Authoritarian leanings demand strength of character, even if that character more closely resembles Al Capone than Abe Lincoln.

It doesn’t matter to his supporters that Trump’s idea of “science” or “facts” or “truth” is whatever he happens to be thinking at the moment, that his actual cognition from what we know through his twittering, speeches, and comments rejects empirical data as “not important” because it’s “not his.” Trump’s is the only opinion that has weight, the only view that to Trump is important; all other views to him are insignificant by comparison –even when those other views are based on years of painstaking scientific research and analysis.

This is how a narcissistic personality perceives the world. And this is how Trump perceives the world: simply through his ego asserting itself.  And since, as psychiatrists, philosophers, sages, and holy men through the centuries have related “the ego is only a self-construct — without actual existence, a non-thing of personal fiction, a projection of the mind upon the world, an idea without substance” — it’s easy to see that Trump’s perception of the world lacks any grounding in reality.

Trump’s narcissism is of a particular brand — malignant narcissism. From what we know of the disorder, this implies that Trump’s perception of the world is one of both constant scrutiny for possible antagonists, and also offensive pursuit against those he believes most critical of him (therefore “dangerous”).  The latter must be dealt with by diminishment or removal — belittling them by name calling, denigrating by calling them “insignificant” or “weak” or “little” or “nothings,” or by seeking revenge on them and attacking them with lawsuits, police action, or economic sanctions in order to erase their criticism.

This is how, if we listen to the first-hand accounting by those who dealt with Trump as a businessman, he conducted himself in business.  Getting on the wrong side of Trump in that arena was a risk to one’s pocketbook and one’s future well-being.

Compassion in a person who suffers from malignant narcissism does not exist.  It may exist for others, but like its companion states of consciousness, empathy and contrition, it is not recognized add-on software to an inflated ego hardened to believe in nothing but itself.

So, here’s the rub. People who support Trump or characters like Trump — dictatorial egomaniacal, greedy, abusive, power-driven personae — do so because they “believe”  (not to be confused with “think”) that such persons in leadership will institute law and order.  Dispel the chaos. Clean the house. Drain the swamp. Throw out the trash. Lock her up.  Build the wall. Secure the borders.  Make ‘em pay. “Make America great again.“

Americans have a long and horrendous history of genocide against the Native People, of enslavement and brutality against darker-skinned people, of unfair economic indenturehood throughout the centuries. That includes today’s laborers’ insufficient pay and lack of benefits. It also includes treating women and minorities as non-citizens, xenophobia against those who aren’t the same geographic or genetic ancestry. Those attitudes are so deeply embedded in the American psyche that even 150+ years after a Civil War was fought to defend those sentiments, there still exists distrust and anger among those people’s descendants.

There is still a strong current of racism in the USA,  based largely on skin color, which appears to be eroding, but at geological pace.

So we have a large segment of the American electorate eager and willing to embrace someone who shares their anger, resentment, distrust, fear — someone boastfully strong who appears desirous of doing something about it. These voters want someone who promises restoration of order, of lawfulness, of eliminating criminal chaos so that America can again be great. What is Trump doing about all this?

Currently, Trump and his allies are working to remove the laws (regulations=laws) governing safety in the workplace, in banking and investment, in social rights, in environmental health, in access to healthcare, in international relations, etc.. Laws which were put in place to prevent chaos are being removed. Laws and regulations which protect Americans from the excesses of those who wield greater economic or judicial power are being removed. Laws are being either ignored (Emoluments?) or outright shitcanned — in order to have “order.”

That’s right: the “law and order” candidate who is out to “reform” America by making it “great” again is turning the country into a version of a wild west frontier town where the revolver and the carbine took precedence in disputes over reasoned discourse. And yet the people who sought to elect and who continue to support an authoritarian person who promised greater security somehow see that lawlessness as law and order??? 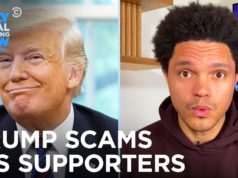