Let me try to be diplomatic here, as I like and respect many of the Democrats who voted “yea” on the Dominion bill, HB1558. First, though, thank you to everyone who voted NAY on this godawful piece of legislation — Democrats Dawn Adams, Hala Ayala, David Bulova, Betsy Carr, Jennifer Carroll Foy, Lee Carter, Kelly Convirs-Fowler, Karrie Delaney, Wendy Gooditis, Elizabeth Guzman, Chris Hurst, Mark Keam, Mark Levine, Alfonso Lopez, Mike Mullin, Kathleen Murphy, Cia Price, Sam Rasoul, David Reid, Debra Rodman, Danica Roem, Luke Torian, David Toscano, Kathy Tran, Cheryl Turpin, Schuyler VanValkenburg and Jeion Ward. I’ve bolded the 15 freshmen who voted “nay” – great jobs! As for the Democrats who voted “yea” on this bill, I’m not sure what to say, other than that they made a big mistake. Oh well…I tried.

P.S. Also thanks to Del. Rasoul’s great leadership throughout all this; very impressive! And Del. Keam really nailed it in this speech against the bill.

P.P.S. Also note that if every Dem had voted no on this, it would have lost. 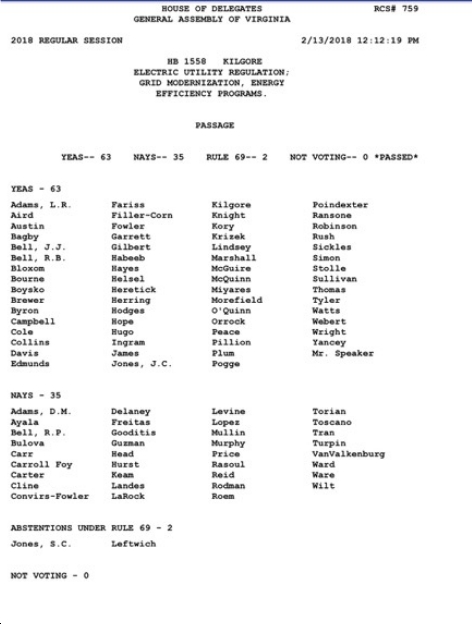