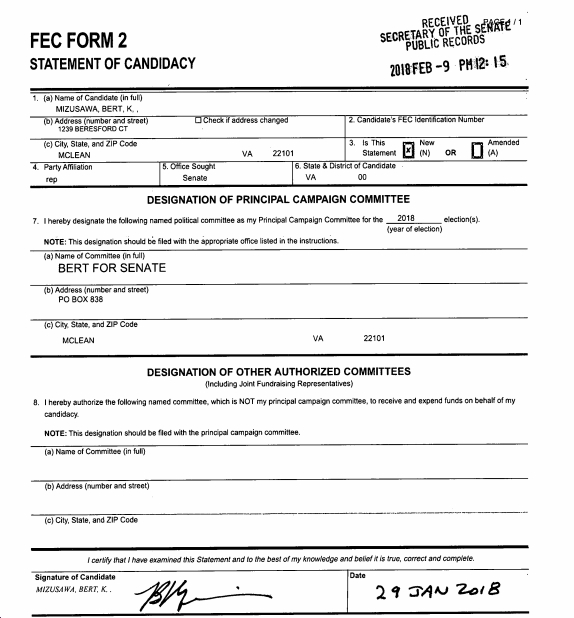 Yep, the Virginia GOP clown car of U.S. Senate candidates — Ewwww Jackson, Neo-Confederate nutjob Corey Stewart, the Teabagger who employs this dude — continues to grow, with the Statement of Candidacy (see image to the right; click to “embiggen”) of Bert Mizusawa. Who is Bert Mizusawa, you might ask? Well, for starters, he’s a huge Trump supporter, which should go over well with the Virginia GOP electorate, even if a large majority of Virginia general election voters despise Trump. 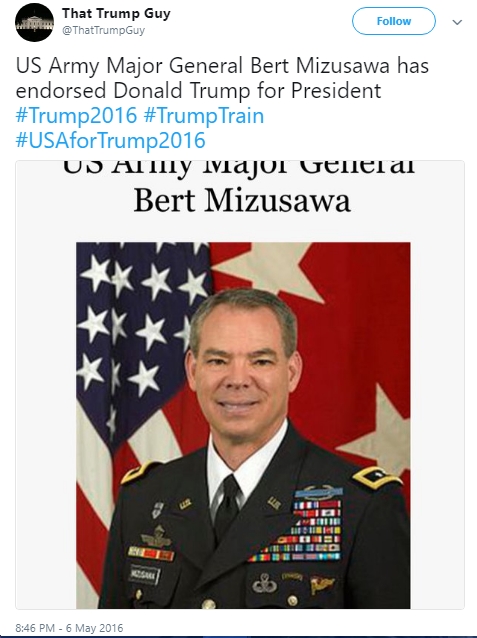 Also check out this 2010 interview with Mizusawa, in which he says (among other things) that:

*He LOVES the Tea Party! — “I adhered to the principles of less spending and smaller government even before the Tea Party movement gave them visibility. It’s a great grassroots movement with lots of energy and ideas. We will be most effective if the energy can be channeled into capable and successful candidates.”

*He does NOT believe love is love — “I believe marriage is between one man and one woman.”

*Arizona’s draconian, “show me your papers” anti-immigrant law was a good thing: “First, a nation is defined by its territory and its people, so we must be able to assert control over our borders and who lives within them. Second, we are a nation of laws, therefore we must enforce the laws, including immigration laws, on the books. In the case of Arizona, I understand they amended their law so the police may not stop someone just because they might be an illegal immigrant, but must ask for identification documentation if there is probable cause to stop them for other reasons. Given the principles on which this nation was founded, I do not understand what all the issues are with enforcing laws that are preexisting.”

So, yeah, the guy’s a Tea Party extremist and Trumpster through and through. Speaking of Trump, apparently Mizusawa was one of Trump’s foreign policy advisers and was up for a big job in the Trump administration (apparently he either didn’t get it or got tired of waiting). And see here as Mizusawa stumps in Falls Church for Trump back in September 2016. Among other things, Mizusawa calls Trump “an amazing man” (yeah, gotta love corrupt kleptocrats, sociopaths and sexual predators, eh?) and a “very very bright man” (LOL, yeah, Trump himself constantly reminds us how much of a “stable genius” he is). My god…dude, how can someone as smart and accomplished as you spew this crap? Ugh.

As for the politics of Mizusawa’s entry into the Virginia GOP U.S. Senate melee, I’d first refer you to this 12/9/17 Washington Post article, which reports that Virginia Republicans had been “pleading” with Mizusawa to get in the race — anybody but the clown car candidates (Corey, Ewww, Freitas) currently in the race, it seems. I mean, seriously, when you’re “pleading” for this nutter to get in the race, because the other candidates are even more unelectable, you know you’re in big trouble.

And as you can see from the information above, Mizusawa may be accomplished, but he’s a Trumpster and Tea Partier through and through. Which means that we now have not one, not two, not three, but FOUR – count ’em! – Teapublican extremists running for the Virginia GOP’s 2018 U.S. Senate nomination to get their butt kicked by Sen. Tim Kaine. More evidence that the Virginia GOP is a complete disaster — disorganized, extreme, fighting over whether to oust an outspoken bigot from their ranks, unable to unite behind one of the growing number of candidates competing for voters to make them Trump’s next lap dog.

In sum, this is going to be a fun campaign, a free-for-all GOP primary chock full of extremists and losers. Break out the hot-buttered popcorn, everyone! 🙂