You know how Republicans like to talk about wanting their campaigns to be based on positive, constructive ideas for the future and not about getting down in the gutter with wild, nasty, vicious, ad hominem attacks against each other? Well, so…just a couple days after the first debate between 2018 VA GOP U.S. Senate frontrunners Corey Stewart and Nick Freitas, and just 12 days after Freitas warned Corey to back off OR ELSE, you can basically kiss goodbye to any hope of a 2018 VA GOP U.S. Senate campaign based on a civil debate over conservative ideas or anything even remotely like that.

Don’t believe me? Check out the following Facebook exchange, which took place this afternoon on – appropriately enough – the bats**** crazy Virginia Freedom Caucus Facebook page, and judge for yourself. First, let me introduce the main characters in this exchange.

With that, check out the following wild-and-crazy exchange between Camp Corey and Team Freitas. Oh, and seriously, I strongly recommend investing in popcorn and hot butter futures, because this 2018 VA GOP U.S. Senate primary is going to be one HELL of a lot of fun to watch! For Democrats, that is – not for VA GOP Chair John “Anti-Semitic ‘Joke’ Dude” Whitbeck. LOL

It quickly escalates from there, as Roy Moore’s former spokesperson Noel Fritsch, now Corey Stewart’s spokesperson, demands that Nick Freitas “quit attacking Corey and instead admit he misspoke and mischaracterized Corey’s position.” In response, Nick Freitas’ wife Tina urges Fritsch to “read John 8:44.” Corey’s Field Director Thomas Dees replies that he “encourage[s] Nick to read the Stop Dangerous Cities Act (S.87)” because “[Freitas’] position on that issue is awful!” Dees adds that “Nick needs to own up and backpedal already.” 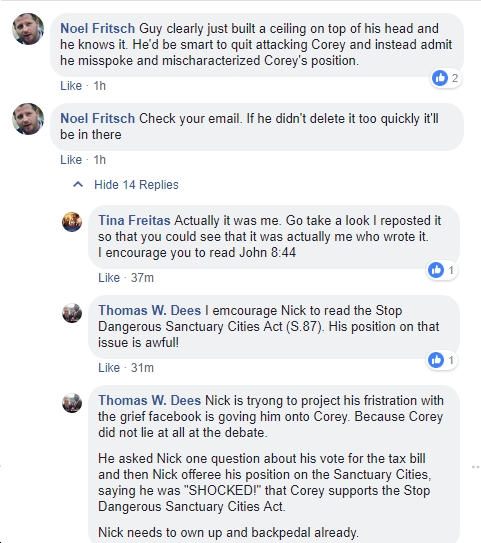 But wait, it gets a lot crazier, as Fritsch posts the language of John 8:44 (“You belong to your father, the devil, and you want to carry out your father’s desires. He was a murderer from the beginning, not holding to the truth, for there is no truth in him. When he lies, he speaks his native language, for he is a liar and the father of lies.“) and asks Nick Freitas’ wife Tina, “Are you saying Thomas belongs to the devil?” Dees then retorts with the zinger, “All ive [sic] done is point out Nicks [sic] opposition to the SDSC Act and that makes me the son of the Devil?” 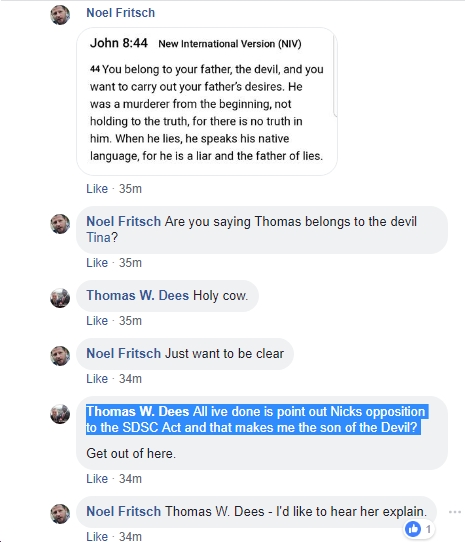 Phew. Had enough yet? Well, mercifully, the brouhaha concludes, at least for the moment, with Dees joking (?) that “Last I checked Lil Nickie [sic] was the son of Satan. Theu [sic] even made that movie! LOL All I am is Doubting Thomas — doubting Lil Nicks [sic] sincerity on immigration issues.” Followed, appropriately, by an image from “Little Nicky.” /fin

My god, this primary is going to be SO much fun. For Virginia Democrats, that is! LOL 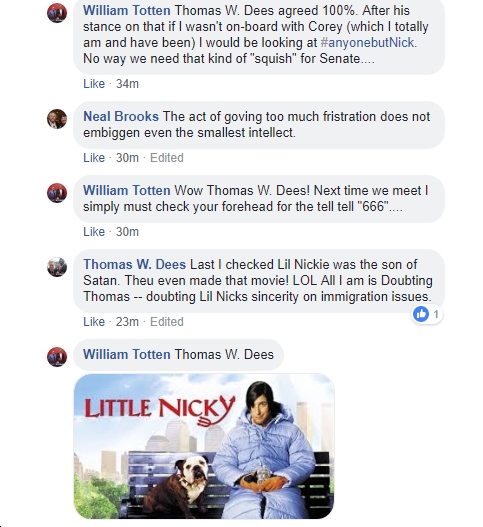