First, check out the glaring disparity in outcomes of bills sponsored by Republicans and by Democrats. In the State Senate, Republicans saw 46% of their bills passed and 28% killed (a plus-18-point success margin), with 9% “consolidated” into other bills and 17% “carried over to 2019” (alive to fight another year). In stark contrast, Senate Democrats had a 27%-46% (minus-19-points) pass/fail rate, with 13% “consolidated” and 14% “carried over to 2019.” Blech!!!

But wait, it gets worse – much, much worse – when we turn to the Virginia House of Delegates. Yes, that’s the chamber where Democrats picked up a whopping 15 seats this past November, climbing within 1 seat of a 50-50 tie. Yes despite this – or perhaps because of it? – Republicans stacked the committees (so much for proportional representation or GOP respect for democracy!) and absolutely decimated Democratic legislation. Thus, while 44% of GOP-sponsored bills passed the House, only 18% (!) of Democratic-sponsored bills passed vs. 81% that were killed by Republicans. That’s right, let me repeat this: despite gaining 15 seats in the Virginia House of Delegates in November, Democrats’ bills were mowed down by Republicans at a rate of 81% failed, 18% passed. Incredible. And by the way, of those 18% that passed, from what I’ve seen, most were non-controversial, relatively minor bills, with VERY few exceptions. In contrast, basically every piece of consequential or major legislation introduced by Democrats was killed by Republicans in the Virginia House of Delegates. Grrrrrrrrrrrrrrrrrrrrrrrr. 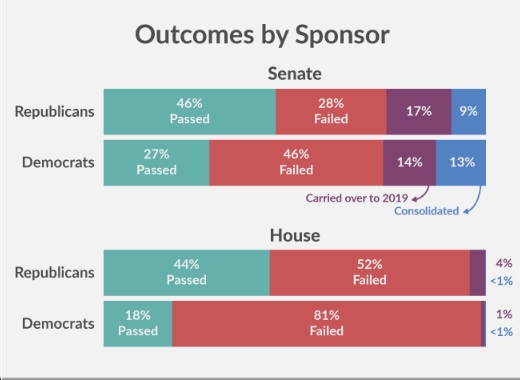 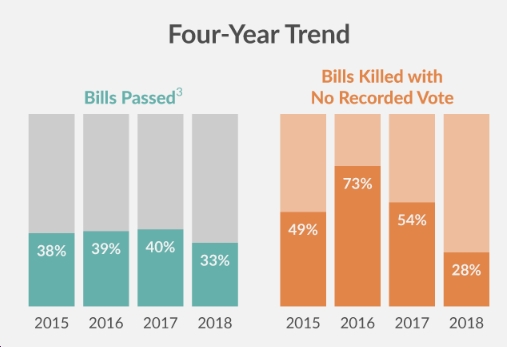 As for WHERE Democrats’ bills were killed, that was obvious if you were following the 2018 Virginia General Assembly. Still, it’s very helpful to see the actual numbers laid out in graphic (in two senses of that word) format. Not surprisingly, Republicans chose to kill Democrats’ bills at the “lowest” level possible – House Subcommittees, the slaughterhouse where 874 bills went to die. Combine that with House Committee, where 294 more bills were killed, and the 51-49 GOP majority House of Delegates was a disaster for Democrats, despite (or because of?) our gains last November. In contrast, “only” 300 bills died in Senate Committee and 62 on the GOP-controlled Senate floor or in GOP-controlled Conference Committee. Still very bad, but not as horrendous as the House of Delegates.

Also note that, in spite of reforms to reduce the number of bills deep-sixed without even a recorded vote, 429 bills died that way in 2018. Pathetic.

Bottom line: this shit isn’t going to change for the better until Democrats control both the House of Delegates and the State Senate. Get ready for 2019…we’ve got a LOT of work cut out for us still!