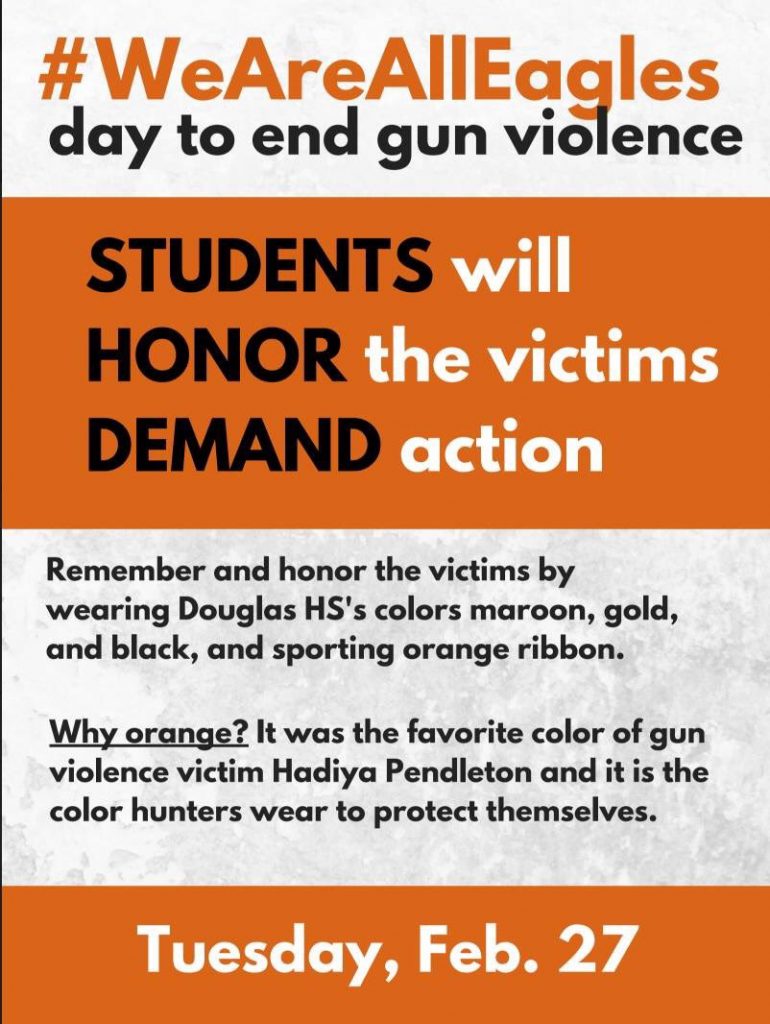 With America still reeling from the tragedy in Parkland, Florida, a little over two weeks ago today, the national conversation about gun violence has continued, led by highly motivated, dedicated activists. At the forefront of this conversation, a group of unflappable teenagers has stepped up and taken the reins. And while the majority of these teen leaders hail from Marjory Stoneman Douglas High School, Virginia has witnessed some incredible young activists of its own in action.

Over the past few weeks, students from all over Northern Virginia and the D.C. Metro Area have come together to form a DMV chapter of Students Demand Action, an offshoot of Moms Demand Action, one of the nation’s largest anti-gun violence organizations. While planning has begun for actions spanning into the next few months, the newly formed group’s first event was held on Tuesday, February 27th. The #WeAreAllEagles Day to End Gun Violence, named after the school mascot of Marjory Stoneman Douglas High School (MSDHS), encouraged students from about a dozen local institutions to wear clothing and accessories in the colors black, maroon, and gold—the official school colors of Stoneman Douglas. 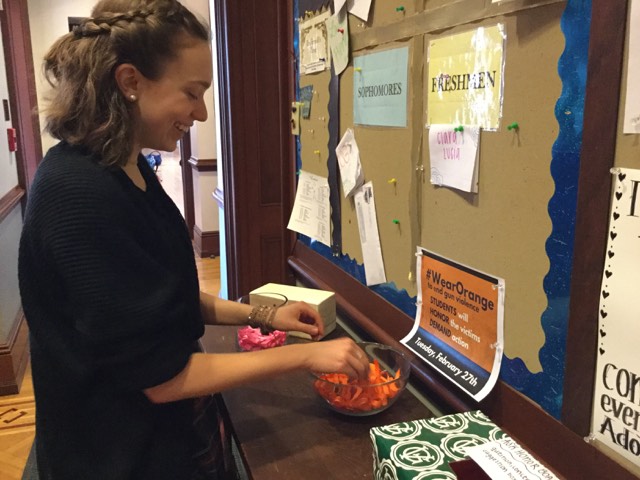 The students also created large banners covered in hopeful messages to be sent to MSDHS as a show of support, while others passed out orange ribbons as a part of the Wear Orange Campaign. That particular color was chosen as the official signifier of the movement to end gun violence, as orange is the color that hunters use to protect themselves from stray bullets out in the wilderness.

This day was spearheaded by many motivated local high schoolers, such as Jay Falk and Hannah Miller at TC Williams High School and Barrett Fife at Georgetown Visitation Preparatory School. Other leaders include James Hurley and Helen Sweeney at St. Stephen’s and St. Agnes School, Kate Castle and Olivia Morton at Episcopal, Ella Wogaman and Laura Kirk at West Springfield High School, Claire Wagner at the Howard Gardner School, and Alex Bve and Michael Nevett at Walter Johnson High School. 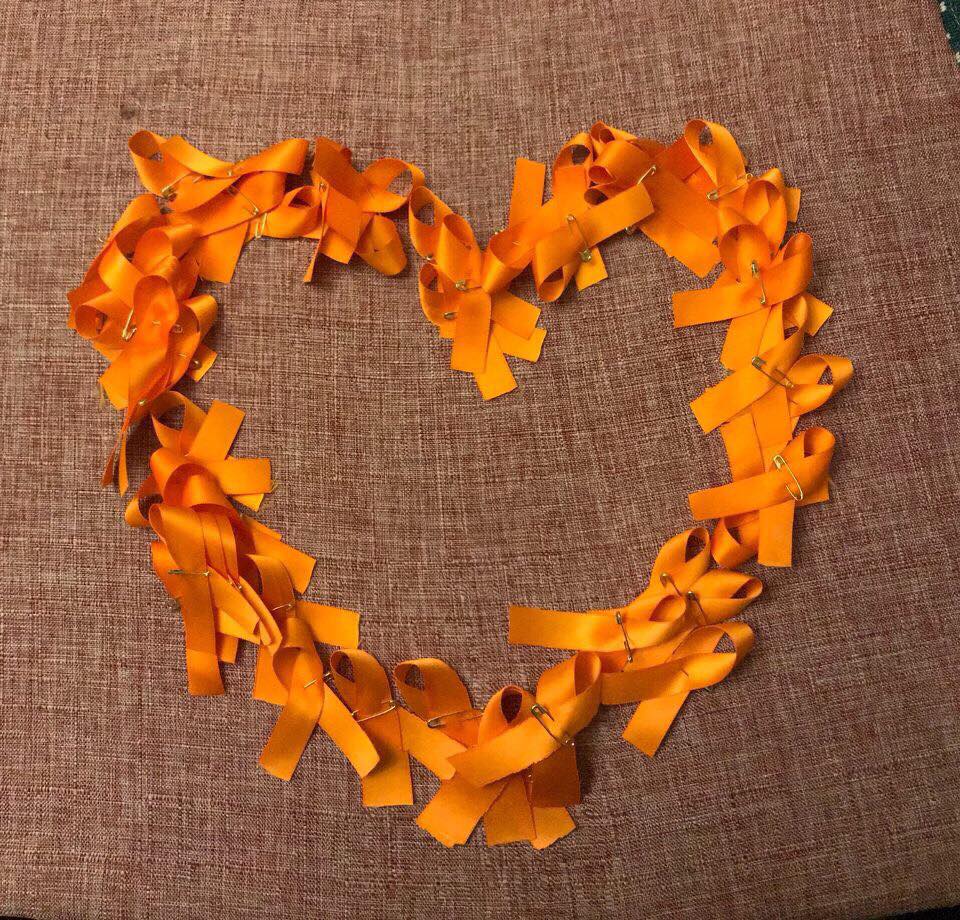 With a few exceptions, Tuesday’s event received overwhelming support at the participating schools. Piles upon piles of orange ribbons vanished within minutes of the school bell ringing. Local media sites covered and advertised the day to their viewers. Teachers and administrators extolled and aided the actions of their students, helping to put up posters, donning orange ribbons themselves, and even supporting the walkouts of their students.

High schools were overtaken by a wave of black, maroon, and gold. Thousands of orange ribbons were handed out, beautiful and moving banners were made, and countless photos were taken. Additionally, these students, true to their generation, have been incredibly active on social media, taking to Facebook, Instagram, Snapchat, and any other platform they can find to get out their message, even in the face of a world that wants to move on from this tragedy. 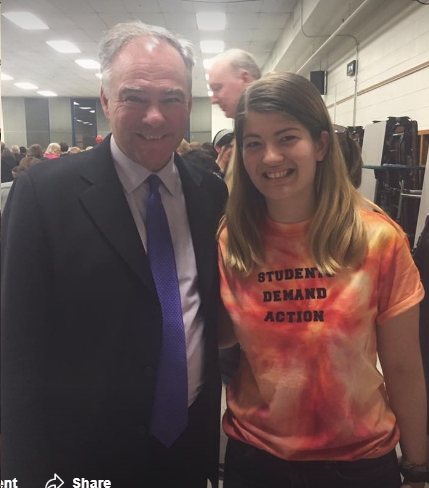 These local activists persist, already making plans that go into the summer. They’ve begun conversations with politicians such as State Senator Adam Ebbin and State Delegate Mark Levine, hoping to shape not only their high schools, but also their governing bodies. They plan to attend marches (including one this Saturday, March 3rd, from 10-12 in front of the United States Capitol), as well as possibly lead some of their own. More than anything else, these young leaders plan on voting in the 2018 elections.

As quoted in the Alexandria Zebra, Falk and Miller – leaders of this movement at TC Williams High School – say: “There needs to be change. Congress is going to hear the power of thousands of students standing up for their own lives. Legislators will either hear us or no longer represent us. First we will honor the victims, then we will march on DC, and then we will take back every state house in the nation.”

As Emma Gonzalez, one of the faces of Stoneman Douglas High School, wrote in her recent Harper’s Bazaar article, “We are children who are being expected to act like adults, while the adults are proving themselves to behave like children.” Congress is back in session this week, with the Parkland shooting still at the forefront of everyone’s minds — citizens’ and legislators’ alike. Things may look relatively bleak right now, and only time can tell where the movement to end gun violence will go. However, with these kids leading the way—in Virginia, Florida, and all across the United States—we can be hopeful that it’s moving in a pretty good direction.

Keep your eyes open and your Facebook page refreshed. Virginia should be excited to see what these kids will do.

For any questions about SDA DMV, upcoming events, or ways to get involved, feel free to contact me at barrettfife@me.com.