I’m not sure what’s more pathetic here: a) the bizarre letter from Rep. Barbara Comstock (R-VA10) to Loudoun County Board Chair Phyllis Randall (D) — see below; or b) the Loudoun Times-Mirror LITERALLY covering this as a “he said, she said” (even more obnoxious, their headline is “She said, she said”) deal, “both sides-ism” run amok – beyond parody.

First, here’s Comstock’s what-the-heck-are-you-ranting-about? letter to Randall, complaining about something that supposedly happened between Randall and Comstock’s Outreach Director, Erin Raynor. According to Comstock’s account, Raynor was “surprised by [Randall’s] hostility both to her attending the meeting as well as our [10th District Young Women’s Leadership Program].” Comstock herself was supposedly “disappointed and dismayed by this hostility and disparagement of the 10th District program.”

Sounds bad, right? Except for one thing: as you can see below from Loudoun Board Chair Phyllis Randall’s response, Randall has a 180-degree different account than Comstock does. In Randall’s telling, Comstock’s letter was “interesting,” in the sense that it was…uh, not at all what happened. Here’s Randall’s account:

As the Commission is conducted from my office, I am always aware of who will be attending the meetings and was happy that Commission members welcomed Ms. Rayner to the meeting. After completing a County Budget meeting, I was happy to have some time to spend at a Commission meeting. Upon walking into the room, Ms. Rayner was already standing up to leave with her coat on and said to me, “I hope you don’t think I’m leaving because you walked in.” We laughed and I asked to speak to her before she left. This interaction was observed by every woman in the room, to include the ladies who invited her, please feel free to call any one of them. Because Ms. Rayner had already expressed she needed to leave, I did try to hasten our conversation. However, the fact that she described me as hostile is both unfortunate and baffling. Furthermore, in no way did I disparage your “Young Woman Leadership Program.”
In fact, I have said in the past, and said more than once to Ms. Rayner during our conversation, that your program was one of the many things that influenced me to bring the Loudoun Commission on Women and Girls to a vote on the Loudoun County Board of Supervisors. Clearly, she and I have very different versions of our conversation. Although I find Ms. Rayner’s interpretation of the conversation inexplicable, I nor anyone else has the right to tell another person what to think or how to feel. To further respond to her version of our conversation is nether helpful,nor would do anything to move my vision and mission to make a positive impact on the lives of women and girls in our area.

As Chairman Randall added to me in an email, “As you can see, Comstock’s office copied the full Loudoun BOS. Funny…why? Because the Loudoun Commission on Women and Girls is conducted out of my office. I asked the BOS to sign off on this and allow it to be a joint, bipartisan effort but on a Party Line vote they voted it down. So I started the initiative from my office. Not sure if Comstock knew that when she sent me the letter.”

So anyway, you can make up your own mind who you believe. For my part, I’m going with Chairman Randall on this one, particularly since there were multiple witnesses, and also because Comstock isn’t exactly known for truthfulness (among her many other failings as a Congresswoman).

Finally, check out below for the Loudoun Times-Mirror’s headline on all this, which literally is “She said, she said.” I mean, I mock the corporate media frequently for the contortions they make to draw “both sides” false equivalencies and to never say what the actual truth is on anything – let alone if someone is lying. But I can’t recall a headline that literally read, “She said, she said” before. A Beatles song? Yes. An advertisement by the New York Times during the 2018 Golden Globes telecast, the point of which was that “the truth is not so unknowable when one of two competing claims is supported by many people — as in cases where multiple women have come forward with similar accounts of being harassed or assaulted by men who deny wrongdoing?” Yes. But an actual headlines in a newspaper? Not sure about that one, but I hope it doesn’t catch on! LOL

Letter to Rep. Comstock from Board Chair Randall 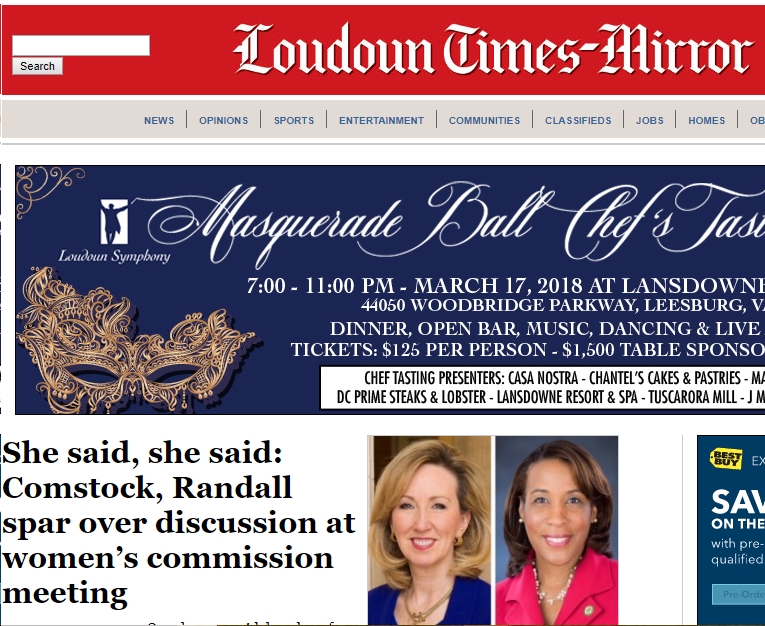