Introductory note: Near the end of the 2018 General Assembly session, and several weeks after the Parkland shooting, Republican Delegate Nick Freitas from Culpeper delivered an incendiary and divisive speech linking gun violence to abortion and the welfare state, attacking today’s Democratic Party as the creators of slavery and massive resistance, yet claiming that any dialogue on this issue required “respect for opposing points of view.” Most of my colleagues viewed his speech as disrespectful; my comments below expand on my speech on the floor in response and the March for Our Lives last Saturday.

When it comes to our discussions about reducing gun violence, elected officials always seem to be speaking past each other instead of speaking with each other. America is telling us that this is no longer acceptable. We see it in the outpouring of energy surrounding the March for our Lives events in many American cities and an apparent shift in public opinion on this issue.

So what will it take to bring some real change?

Let’s start with some acknowledgements.

First, good public policy debate starts with respect for opposing points of view. Yet there has been little of that in the gun debate over the last decade. In the last week of our session, we heard the concerns of Republican leadership about nasty messages they have received from constituents and language in blog posts directed at them. We clearly disagree on many issues related to guns, but I will never accuse any of them of having “blood on their hands” because of their positions.

Many of us Democrats have been there. We have had plastic fetuses sent to us during the debates on abortion. We have received unsigned messages that we “will rot in hell” if we vote one way or the other on laws to prevent discrimination against our LGBTQ neighbors or embrace protections for new Americans. We know how it feels.

And so, too, do the young Parkland activists. The NRA and its apologists have labeled them as “actors” who are being manipulated, claiming they are too young to understand what they are saying — extremely disrespectful commentary directed at young women and men who experienced 6½ minutes of gun violence terror and will likely feel anguish for a lifetime. While we can all agree that free speech should be protected, let us commit to reject efforts to demonize or minimize others, or to criticize their motives.

Respectful Discussion
A respectful discussion about gun safety should recognize that many in this country are worried about stepping onto a “slippery slope” that would inevitably end with their guns being confiscated. We need to assure them that their concerns are misplaced, and the time has now come to act. 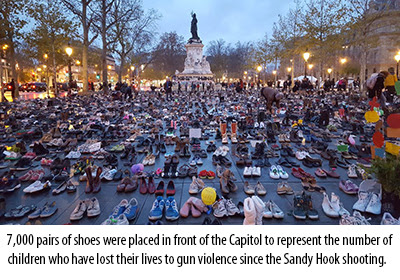 Several decades ago, we heard increasing concerns about deaths due to auto accidents. We didn’t try to ban cars, but we studied the problem and we took action. We passed better drunk driving laws, required seatbelts and airbags, improved our roads, all reasonable protections enacted by government without affecting basic rights of individuals. We did something. While we should avoid equating guns with motor vehicles — few argued that we should take away cars — we realized we had a problem, studied it, concluded what would work, and acted.

And when the public became dismayed about the link between smoking and death, we took action. We didn’t say that people could not smoke or confiscate cigarettes, but we imposed age limitations, taxed the product, and restricted places where people could exercise their “liberty” to smoke. The result has been fewer smokers and less lung cancer.

And we are now doing the same with prescription medication and opioids. We see a public health issue, and we are both studying the causes of the problems and putting protections in place to limit the risk based on evidence that shows what works.

This is what Americans do — we solve problems. We can do it with gun violence.

Effective Gun Safety Policies — What Works?
It would be easier if we had more evidence about what policies work, but the NRA has consistently opposed allowing the Centers for Disease Control to do any studies.

The best evidence we have about policies that work was just released last month from the nonpartisan think tank, the Rand Corporation. And their conclusions resonate with public opinion on this issue. They found that:
1. Background checks work
2. Child restraint measures work
3. Laws to discourage people with mental illness from having guns work, though not necessarily to reduce suicide (about two thirds of all gun deaths are suicides)

Significantly, Rand said that we need more gun safety research, not less, and that we should not fall into the trap embraced all-too-often by defenders of the Second Amendment, that is, that nothing works.

We Can Do Better
Virginians want us to reduce and end gun violence — not just mass shootings but also the handgun violence that besets many communities. That is why House Democrats advanced more than 40 common-sense gun safety measures this session, all of which were defeated with little debate in small subcommittees. And it is why we have created a task force to determine the best approaches for next session.  In the next six months, we will be meeting in different areas throughout the state to collect evidence and perspectives on this critical issue. Our sons, daughters, and grandchildren are challenging us to do better; let’s show them that we can.