See below for reactions to the news of Speaker Paul “Lyin'” Ryan’s retirement announcement. My reaction is good riddance to really stinky trash. Also, I love the top-rated comments on the Bezos/Washington Post story:

*”Let’s see. His accomplishments include cutting taxes, raising spending, ruining healthcare, setting the table for cutting medicare and social security and accelerating the income inequality gap (just to name a few). His work on behalf of our country and it’s citizens is done now that we are all screwed. Atta boy Paul, way to go.” (266 likes)

*”Instead of redeeming himself by standing up to the evil person who occupies the oval office, he walks away. His name will go down in history as a coward and a traitor.” (320 likes)

*”Ryan has failed at both his pretended goals and his real goals. He pretended to be a champion of fiscal responsibility, convincing naive centrists that he really meant it; but his legacy is one of bigger deficits. His real goal was to eviscerate the social safety net, under the pretense of doing it in the name of fiscal responsibility. In particular, his signature proposal was to voucherize, privatize, and defund Medicare. But that’s not happening And meanwhile, as Speaker, his main achievement, if you can call it that, has been as enabler of corruption and contempt for rule of law. It’s unclear whether the end game will be Democratic takeover of the House or autocracy, American style. But either way, what a legacy.” (229 likes)

Now, here are the Virginia reactions, with comments by yours truly. I’ll add more as I see them. Also, see below for video of Lyin’ Ryan’s announcement.

Rep. Scott Taylor (R-VA02): “‪I want to thank Speaker Paul Ryan Paul Ryan for his great service to ??. Getting to know him over the past year and having the privilege to travel with him overseas to meet world leaders, I found him honorable, honest, and a great patriot. Paul, you are appreciated. We wish the best to you and your family in the next chapter of your lives.” — Utterly nauseating; there is nothing “honorable” or “honest” or a “patriot” (let alone a “great” one!) about Lyin’ Paul Ryan. My god, Taylor needs to go!

Gov. Ralph Northam: Courtesy of @gmoomaw: “@GovernorVA weighs in on Paul Ryan retirement on @WRVA: ‘I think it’s just a signal that there’s some significant dysfunction in Washington right now… I regret that policy is being made in Washington as it is: Over a Twitter account… Policy is something that’s a team effort.'” Uh, nope. In fact, Ryan’s departure is NOT a generic or generalized “signal” of “dysfunction in Washington”; it is SPECIFICALLY and UNEQUIVOCALLY the result of the Republican Party going completely off the far-right deep end, failing to stand up to our corrupt “president,” passing a debt-exploding tax cut for the wealthy, etc. Also, it’s about Ryan calculating that he’s toast as Speaker after November’s “blue wave” elections, regardless. Democrats should say all that — clearly.

VA-01 Democratic candidate Edwin Santana: “Speaker Paul Ryan is calling it quits on Congress and his role as speaker. The GOP is falling apart as the blue wave approaches and progressives are leading the charge. Wittman, there’s still time to join Speaker Ryan on the way out. (photo by Gage Skidmore) Chip in today and help send Wittman the message: www.santanaforcongress.com/donate ” BINGO!

Rep. Gerry Connolly (VA-11; @GerryConnolly): “With his retirement announcement Speaker Paul Ryan becomes the first casualty of the 2018 midterm election.” Yep – and many more to come!

Rep. Tom Garrett (R-VAO5): “I commend Speaker Ryan on an impressive career of service to our nation. While I certainly did not always agree with the decisions of House leadership, his record of service deserves acknowledgment. I am excited that new House leadership will afford new opportunities. I hope we can aggressively pursue federal entitlement reform, strengthen our promise to our seniors, provide alternatives to burdensome student loan debt, and reign in federal overreach by pursuing meaningful cannabis and criminal justice reforms. I am also hopeful that new leadership will allow us to address the looming generational challenges of securing our southern border and creating circumstances allowing jobs and economic growth to take root across the Fifth District and across our nation.” Laughable. Also note the typo – should be “rein in,” not “reign in.” This guy can’t spell, on top of being far right. Get him outta there in November!

5th CD Dem candidate RD Huffstetler (@rdhjr) “He sees the writing on the wall and knows what’s coming this November. It’s time to replace the tired partisans in DC with a new group of leaders that actually wants to get things done for the country.” EXACTLY! 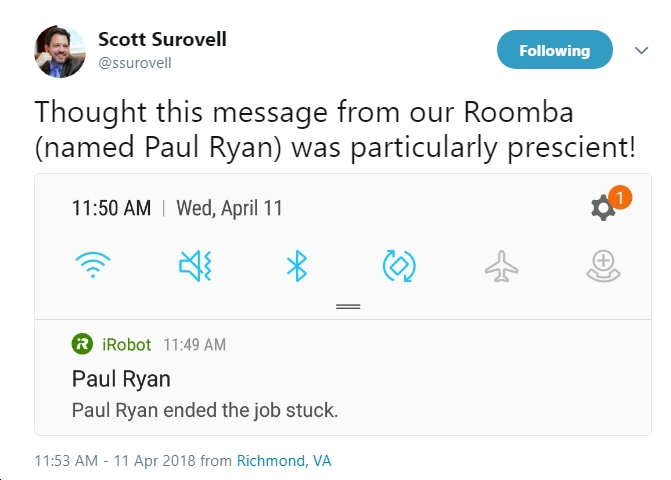 Rep. Bob Goodlatte (R – VA06): “SpeakerRyan‘s achievements during his time in this role will benefit Americans for generations to come. I am honored to call Paul a friend, and I wish him and his family the very best.” Hahahahahaha.

Rep. Barbara Comstock (R-VA10): Same comment as I made for Bob BADlatte.

Rep. Dave Brat (R-VA07): “Today, Speaker Ryan announced that he will not be seeking reelection, and he was very clear that creating time to spend with his family was priority in his decision-making process. We all remember that he did not seek the speaker job – he knew that leadership roles are simply exhausting. We thank Paul for his service to our country and acknowledge his leadership in passing a historic tax cuts and reform package. This was his goal since he was Chairman of Ways and Means, and he achieved it through the speaker role.”