With Virginia Medicaid expansion sooooooo close to actually happening, the hard right of the Virginia GOP is busy threatening to primary any Republican who votes to help hundreds of thousands of Virginians, rural hospitals, Virginia taxpayers, Virginia’s economy, etc. Check out the following comments from several of the most extreme members of the Virginia General Assembly: Sen. Amanda Chase, Sen. Dick Black, Del. Brenda Pogge and Del. Tony Wilt. According to Sen. Chase, “Any Republican who changes their position should be challenged in a primary.” Which means, I guess, that we should expect primaries for House Speaker Kirk Cox, House Appropriations Committee Chair Chris Jones, House Commerce and Labor Committee Chair Terry Kilgore, etc.  Haha, this should be fun. 😉

Of course, what’s actually going to happen today – most likely – is that the Senate will vote to “discharge” the budget bill from Senate Finance Committee to the full floor, followed by hours of ranting and raving (lots of “sound and fury,” signifying…not much, really, other than posturing and face saving/ass covering) by Senate Majority Leader Tommy Norment and others, followed by passage of the budget with Medicaid expansion. At least that’s one theory I heard last night from a good source. So we’ll see what happens today, but my bet at this point is on Medicaid expansion actually happening – FINALLY! My bet is also that the Amanda Chases and Brenda Pogges of the world are mostly full of hot air and…other stuff. But fine with me if the Virginia GOP wants to tear itself apart (between its normal conservatives and its American Taliban conservatives); I’m always up for that! LOL

P.S. The one who actually SHOULD be primaried is Amanda Chase. I hear rumors she might be; let’s hope they are correct. 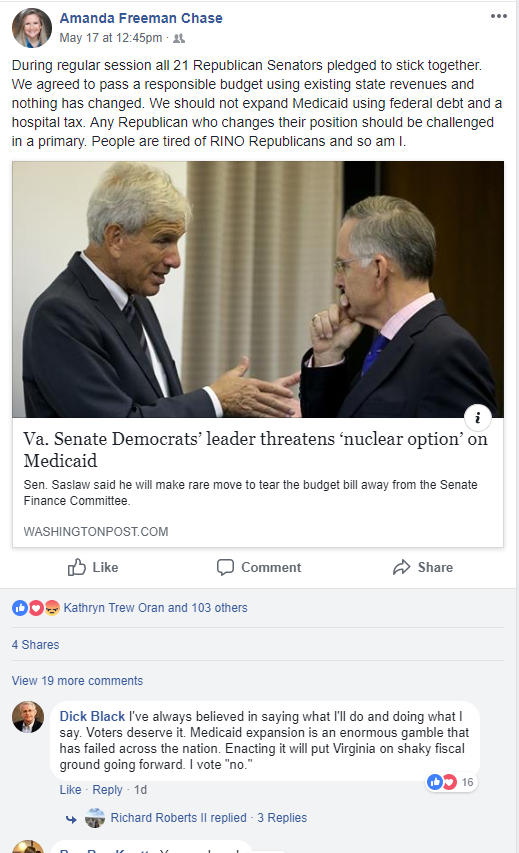