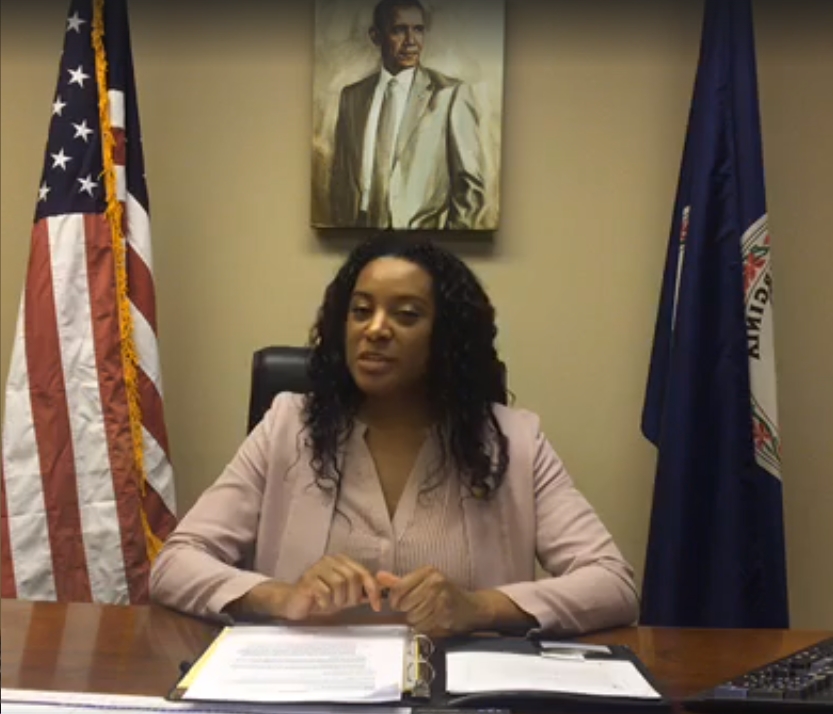 By Delegate Jennifer Carroll Foy, who represents the second district in the House of Delegates, covering parts of Prince William and Stafford counties.

On Thursday I, along with Delegates Roem, Guzman and Carter, sent a letter calling on the Prince William County Commonwealth’s Attorney, Mr. Paul Ebert, to follow the lead of Richmond Commonwealth’s Attorney Michael Herring in ending cash bail. Instead, we are asking him to create a pretrial release system that is based on the defendant’s perceived public safety and flight risk rather than the defendant’s ability to pay.

This is a very personal issue to me. When I’m not in session for the General Assembly, I am a public defender in Arlington. I have also previously served as a Magistrate in the city of Richmond for the Supreme Court of Virginia.

In the courtroom, I see how this broken system of cash bail plays out every day. As a public defender, I represent defendants whose income falls far below the poverty line. These defendants are often children, people with mental disabilities, and the chronically poor. Here’s a typical situation: one of my clients is arrested for a non-violent crime, something that could be as small as disorderly conduct. The judge sets bail. Even paying $50 or $100 to a bondman is impossible for many of my clients so they must sit in jail waiting for trial.

Especially in jurisdictions with large populations like Prince William County, these wait times are often prohibitive. Indeed, according to studies done across the country, some defendants have been known to spend up to two months in jail pretrial. Since very few jobs, especially low-wage jobs, allow someone to take months off of work and then return as if nothing happened, they lose their employment. Without a job, my clients cannot afford to pay rent, lose their homes, and sometimes, their children. That is high price to pay for being poor.

While some of my clients are found guilty of committing crimes, many are not. But, after months sitting in jail, they are desperate. Study after study has shown that people who cannot afford bail are more likely to be coerced into taking plea deals, even when they are innocent, because of their desperation.

As you can imagine, this system disproportionately harms the most vulnerable people in our society. Indeed, nine in ten individuals held in jail pretrial remain incarcerated only because they have not posted money bail. If the bedrock of our criminal justice system truly is that everyone – regardless of income or race – is entitled to equal treatment under the law, the cash bail system is a serious affront to the idea of equality and justice for all.

Now, people often ask me if eliminating cash bail would put our community at risk. As a new mother raising twin boys in Prince William County, I take the job of ensuring that our community is safe, secure and prosperous very seriously. The problem is that cash bail isn’t actually “tough on crime” – it’s merely a way to seem tough on crime without really thinking through the most effective ways to keep our streets safe. What cash bail does is allow a dangerous criminal to buy his way out of jail. In two large jurisdictions studied by the Laura and John Arnold Foundation, about half of individuals identified as “high risk” were able to buy their way out of jail due to the money bail system. If a person is a flight risk or danger to the community, they should not be given a bond.  A $500 bond does not make a person less dangerous or guarantee his or her appearance in court.  If a person deserves to be released, then he or she should be. I also endorse the use of pre-trial release conditions such as mandatory check-ins with a pre-trial officer, substance abuse evaluation and treatment or compliance with mental health services.

For years, we have seen politicians claim that punitive, so called “tough on crime” laws will keep us safe. But, these policies have disproportionately hurt African American and Latino populations, ripped families apart, and passed along billions of dollars in expenses to taxpayers without improving public safety. Instead, we need a smarter, fairer, and more effective criminal justice system. Reforming our bail practice would be a step in the right direction.