I beg your indulgence for this admittedly long missive—and I thank you for your patience. I must share a truly sad and chilling story about your 2018 Senate opponent Corey Stewart, whom I encountered several times on my failed campaign run in 2017.

Oh how I vividly remember Friday, April 21, 2017: Hot, Hazy, and Humid in more ways than one. I was in deep Trump Country for sure, but I was determined to visit every part of Virginia as the longest-of-long-shots Democratic candidate for Lt Governor. My wife Diane and I were attending the famous “Shad Planking” in tiny Wakefield—where politicians of all stripes once flocked to share good cheer. However, the 500 attendees on this day were 95% Republican and white. And I was the only statewide elected official or candidate from my party. I truly felt alone, yet found deep solace in seeing uber Congressman Bobby Scott there, too. We both joked that we were at the Alamo. 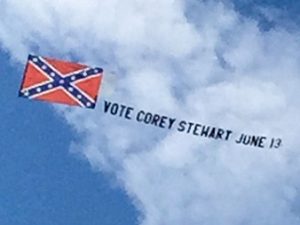 Wonderfully, Diane and I were treated by everyone with grace, dignity, and respect for just showing up. The gracious organizers allowed all statewide candidates for Governor, LG, and AG to speak: myself and six Republicans. What I remember vividly before I spoke to a remarkably receptive crowd was seeing in the deep blue sky a small “Stewart for Governor” plane pulling a banner the size of a trailer truck. Mr. Stewart had paid this plane to pull the Confederate battle flag. As the plane and huge banner were flying above, I could sense and see that 99% of the suddenly silent crowd was quite embarrassed by this truly brazen and crass attempt to appeal to the prejudices of the remaining 1%.

In his race against you, I shudder to think what other painful antics Mr. Stewart will engage in. Stay strong! The party of Lincoln in Virginia is no more with the nomination of Mr. Stewart. As an American, I am troubled that this man is your opponent. But I am also heartened about our state’s future because your landslide reelection in November is going to show our country that we do not represent the old Virginia Way that is enamored with Lost Causes and painful symbols that divide us.

We are inclusive. We are tolerant. We are compassionate. There is a New Virginia.