When I started blogging about Virginia politics, back in 2005 – and yes, in many ways that does seem like ancient history, even though it’s only 13 years ago – the type of Republicans I observed, wrote about and interacted with were mostly conservatives, mostly reasonable/sane, and mostly not rabid xenophobes or “white nationalists.” For instance, the statewide GOP ticket in 2005 was the relatively milquetoast Attorney General Jerry Kilgore for governor (vs. Tim Kaine), mainstream Republican State Sen. Bill Bolling and…ok, Bob McDonnell, from the party’s theocratic/Pat Robertson wing, but probably not someone comfortable with Ken Cuccinelli, let alone with Corey Stewart.

Also, go back and look at the Republicans populating the Virginia General Assembly in 2005 – a lot of fairly normal, sane Republicans (e.g., Bill Bolling; Jeannemarie Davis, who was a moderate or even liberal Republicans before she went off the far-right deep end; Russ Potts; Walter Stosch; John Watkins; Tom Rust; Vince Callahan; , some of whom were conservatives and some of whom were truly moderates, most of whom were ready to work with Democrats for the good of Virginia. More to the point, it’s hard to find any of those people (ok, there were a few crazies back then too: Dick Black and “Sideshow Bob” Marshall were both in the House of Delegates in 2005; Nick Rerras and Ken Kookinelli were in the State Senate) who would EVER stoop to the vitriol, viciousness, anti-LGBT bigotry, “ruthlessness,” xenophobia, stoking of hatred, empowerment of white supremacy and anti-Semitism, etc. that we see with Corey Stewart, now the Virginia GOP’s nominee for U.S. Senate in 2018.

Fast forward to June 14, 2018, two days after Corey “Trump Mini-Me” Stewart completed his takeover of the Virginia GOP (also as Trump has apparently completed HIS takeover of the national GOP). Today, someone like two-term Lt. Governor Bill Bolling (R) expresses my thoughts exactly, when he says: 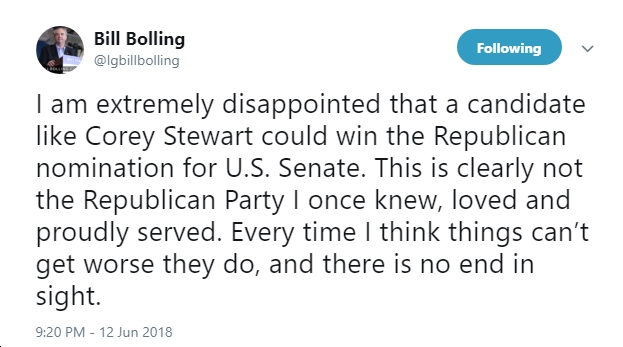 And then there’s the astonishing piece by long-time conservative activist and former Virginia GOP Communications Director and Executive Director Shaun Kenney over at Virginia conservative blog Bearing Drift. I’ll provide highlights of that piece, but first here’s an intro from Tom Perriello: 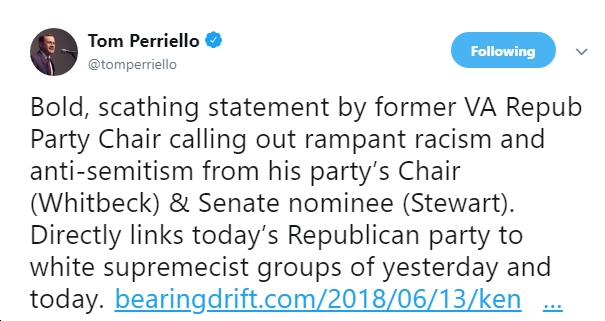 Now, for a bit more on what set off Shaun Kenney off, here’s a photo he posted of Corey Stewart posing with “white nationalist”/”Unite the Right” organizer Jason Kessler and some other folks who…you can read about them here (hint: it’s not a pretty picture). 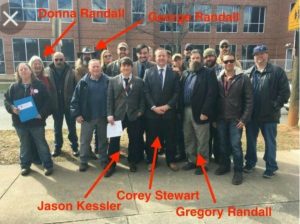 With that, here are some highlights (bolding added by me for emphasis) from conservative and former Virginia GOP Communications Director/Executive Director Shaun Kenney’s brutal take down of the Virginia GOP.

P.S. On a somewhat related note, just to show how far the Republican Party – and the corporate media, and possibly society in general etc. – have fallen since 2006, I was chatting with Ben “Not Larry Sabato” Tribbett about how, if the infamous George Allen “macaca” incident took place today, instead of severely harming a Republican candidate, it would probably be shrugged off or barely paid attention to. That’s a seriously frightening thought, but Ben and I agreed, an unequivocally true one…