Let me get this straight: this lawsuit was filed in early October 2017, but we’re only hearing about it now? And the Governor of Virginia (then Terry McAuliffe, now Ralph Northam) is only doing something – or at least SAYING something – about it now? Uh, why? And where’s the corporate media been on this? #FAIL all around.

UPDATE: Actually, public media did write about this at the time. See this PBS story and this public radio story.

On Oct. 4, 2017, a minor in immigration detention filed this lawsuit in the U.S. District Court for the Western District of Virginia. Represented by the Washington Lawyers’ Committee for Civil Rights and Urban Affairs as well as private counsel, plaintiff sued the Shenandoah Valley Juvenile Center Commission, the owner and operator of his detention facility. Plaintiff brought the suit under the federal civil rights statute 42 U.S.C. § 1983. Plaintiff also sought class action certification for all similarly situated minors who were or would be detained at the same facility.

Plaintiff alleged that he was a 17-year-old Mexican unaccompanied minor, detained at the Shenandoah Valley Juvenile Center (SVJC) in Staunton, VA, for the sole reason that he had entered the U.S. without authorization. Plaintiff had suffered from domestic abuse and other violence in Mexico, and had fled to the U.S. to seek asylum. However, his prolonged detention at various U.S. facilities had exacerbated his trauma. 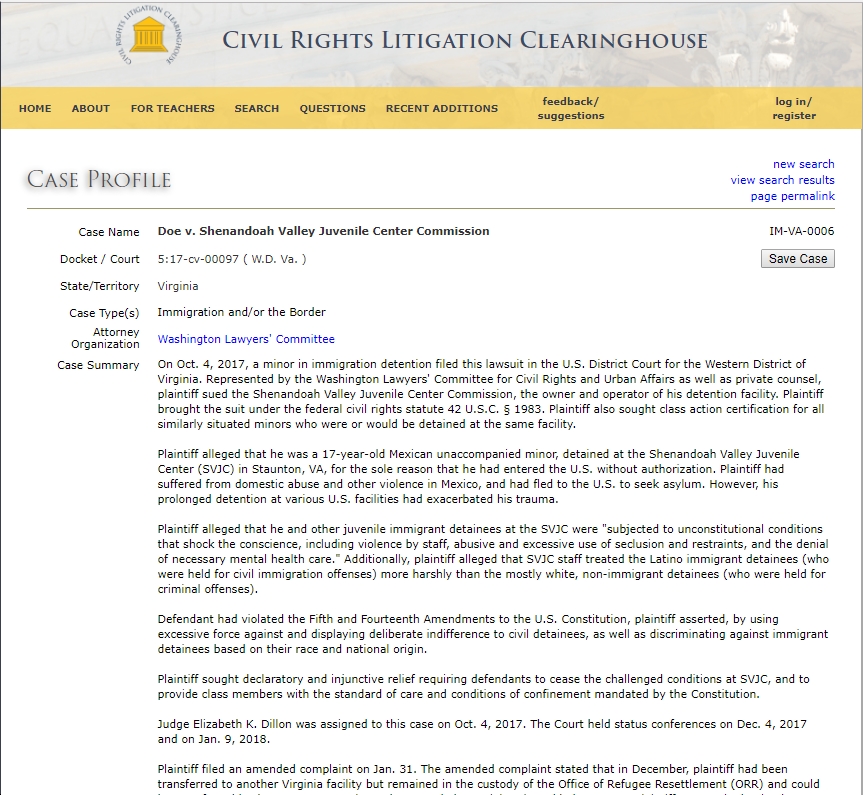