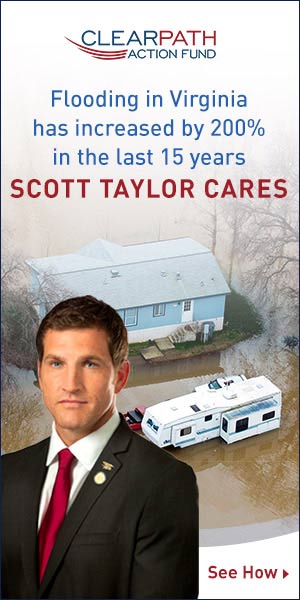 I saw a website ad today from ClearPath Action Fund which, using a photo from Oroville, California, claimed that “Scott Taylor Cares” about flooding in Virginia. So I decided to check the group out.

First off, it’s important to know that ClearPath Foundation was founded by “GOP-mega-donor Jay Faison,” a guy who only “pretends to care about climate change.” As if that’s not bad enough:

…Faison doesn’t even understand the difference between [clean energy and dirty energy]. He enthusiastically favors more drilling for natural gas, despite the many studies demonstrating that methane leakage renders natural gas no better for the climate than coal. He calls for expedited approval of liquefied natural gas terminals, despite the fact that liquefying gas and shipping it overseas makes it even worse for the climate. He also talks up the promise of “clean coal,” even though the carbon-capture-and-sequestration technology that could theoretically make coal less dirty has yet to be proven affordable or widely effective.

So much for Jay Faison and ClearPath being pro-environment or even pro-clean-energy.

As for ClearPath’s endorsement of Scott Taylor, it cites Taylor’s membership in something it refers to as the “Bipartisan Solutions Caucus” to work towards solutions to climate change. But, is there even such a thing as the Bipartisan Solutions Caucus? I googled the term and found just one unrelated result, so it clearly doesn’t exist. Perhaps the front group ClearPath was talking about is the “Climate Solutions Caucus?” With regard to that group, ThinkProgress reports that Sen. Sheldon Whitehouse “referred to the House Climate Solutions Caucus as the ‘do-nothing caucus’ for its inability to propose any form of climate legislation.” And InsideClimate News writes that “the caucus is attracting more and more GOP members whose voting records carry a distinct tilt against action on the climate crisis.” #FAIL

Regardless of what ClearPath, a group founded to prop up Republican Congressional candidates, believes, Scott Taylor has a pathetic 6% lifetime score from the League of Conservation Voters and a 100% score from the Koch-funded American Energy Alliance, which urges on its website that the U.S. “fully withdraw” from the Paris Climate Accord and which wants to slash support for wind power, among other things. So, is Scott Taylor really doing anything to stop climate change? His record certainly doesn’t indicate that he is, and this endorsement by a pro-fracking, pro-“clean-coal” only confirms the fact that Taylor is horrible when it comes to energy and environmental issues, just as he’s horrible on most other issues. This November, please vote Democrat Elaine Luria instead.