Is it my imagination, or is Rep. Scott Taylor (R-VA02) becoming increasingly unhinged these days? Earlier this week, I posted UNHINGED: Scott Taylor, in ducking Corey Stewart, wildly tweets about Elaine Luria’s 20 years of Naval service and Tied to His Party’s U.S. Senate Nominee, Rep. Scott Taylor (R-VA02) Loses It, Launches Into “Convoluted Screed,” Claims He’s Nothing Like Corey Stewart Because “My son is named after a black guy”. There was also this hysterical interview on right-wing/Trumpster radio.

Now, Taylor’s taken to tweeting in Arabic (see below; is this from Google Translate?) that “the dogs are barking, but the convoy (does he mean “caravan?”) is moving.” Oh, and WHY is Taylor tweeting this? Because…who knows exactly, but it’s his response to yesterday’s story in MediaMatters that reported, “When Rep. Scott Taylor (R-VA) published his 2015 book, he included an endorsement from a writer who has built a career on anti-Muslim bigotry and was even banned from the United Kingdom for his toxic rhetoric.”

Taylor is a Republican congressman who began representing Virginia’s 2nd Congressional District in 2017. He previously authored the book Trust Betrayed: Barack Obama, Hillary Clinton, and the Selling Out of America’s National Security. The book contains a page of “praise” that includes a quote from Robert Spencer, who is identified as the “author of the New York Times bestsellers The Politically Incorrect Guide to Islam (and the Crusades) and The Truth About Muhammad.”

So yeah, in response to a story about how his book included praise from a “toxic” anti-Muslim bigot who was banned fro the UK, Taylor attempts to tweet an Arabic saying about dogs barking and caravans/convoys continuing to move…or something. Yeah, seriously. So…this November, can VA-02 voters PLEASE (من فضلَك in Arabic) vote for Democrat Elaine Luria and give Scott Taylor the time to pursue his other interests, including perhaps working on his Arabic language skills? Shukran! 😉 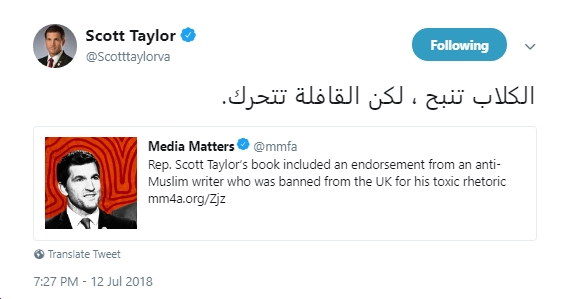 Process for Appointing New Hanover School Board Member Violated US Constitution By Requiring That They Be a Conservative Christian, Commit to Breaking Virginia Law...