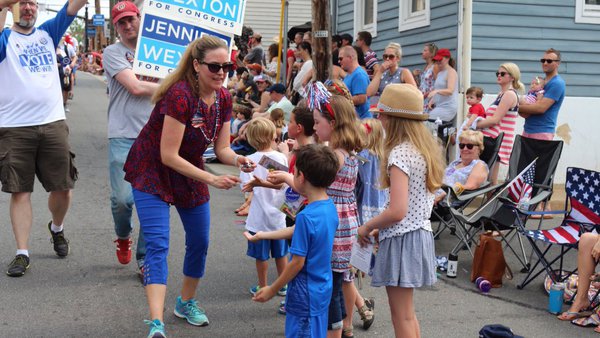 Readers of the New York Times were recently treated to a inside look at Barbara Comstock’s reelection strategy. When claiming that Comstock is good at “showing up,” presumably the Times is referring to Comstock’s photo ops, because she has never held a town hall meeting since being elected to Congress in 2014.

In any event we’ve heard this same tired nonsense from the Comstock campaign for years now. She works hard – She is a tireless campaigner – She doesn’t like to lose. It’s as if Comstock has discovered some secret formula that only she possesses and this alone will guarantee her victory in November.

Let’s assume for a moment that Comstock has a brilliant strategy and that she can win simply by outhustling her competition. Based on her performance the last two days, she is headed for a devastating loss.

In keeping with her strategy, Comstock bragged on her campaign website last year about how many events she attended on July 4. This year, Comstock’s low energy performance resulted in losing to Jennifer Wexton at her own game.

Comstock’s game is starting to slip. She only did four campaign events compared to the seven she did last year.

Four events – that’s it. She skipped last year’s trip to Clifton, Manassas and McLean. She was done before 5:00 PM and didn’t even bother to go the fireworks in her hometown of McLean.

Meanwhile, Jennifer Wexton had a full day, with six events running well into the evening.

This does not even include the well-organized Team Wexton presence at the Clifton and Great Falls parades, where Jennifer was not able to attend in person.

Jennifer’s day ended somewhere around 9:00 PM. She did two more events than Comstock and worked at least four hours longer. She was with Tim Kaine at three of those events, while Barbara Comstock and Corey Stewart spent their days miles apart.

Jennifer Wexton started the next day bright and early at 9:00 AM. Once again she was with Tim Kaine at a packed house with more than 110 people in attendance. That’s a huge turnout for a morning event on a weekday after a late night July 4th!

Team Wexton also had a second event that day at another office opening with Tim Kaine.

Barbara Comstock had no events that day. Instead she spent the day tweeting about Bob Dole.

While Comstock was tweeting about Bob Dole, Jennifer was discussing the following on Twitter:

Barbara Comstock’s low energy performance these past two days demonstrates that she can’t even beat Jennifer Wexton when it comes to just “showing up.”

How Far Right Are the VA10 Republican Candidates? Who Might Be the Toughest/Weakest Opponent for Rep. Jennifer Wexton (D) in November?

Virginia’s Democratic Members of Congress Condemn Putin’s “Illegal Invasion of Ukraine,” “Act of Aggression That Serves Only the Irrational Self-Interest of One Man”