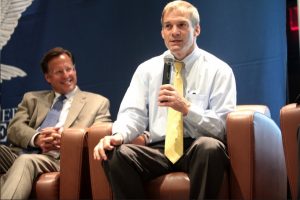 If there’s one thing we know about Rep. Dave Brat (R-VA07), it’s that he loooves to hear himself flap his gums on pretty much any subject. So surely, Brat must have some thoughts on the latest news regarding his personal “mentor,” faaaar-right “Freedom Caucus” founder Rep. Jim Jordan, now that this is happening? (note: photo credit to Gage Skidmore)

Two more former Ohio State wrestlers came forward Thursday to claim that Rep. Jim Jordan (R-OH) knew about allegations of rampant sexual abuse carried out by the team doctor while Jordan was the assistant coach, despite his denials.

This brings the total up to five of Jordan’s former wrestlers accusing him of lying.

According to a Thursday NBC report, Shawn Dailey says that he was groped repeatedly by team doctor Richard Strauss in the 1990s. He said that while he was too ashamed to report his experience directly to Jordan, he partook in multiple conversations with Jordan and his teammates during which Strauss’ alleged conduct was discussed.

Given all this, I wonder if Brat might have a word or two to say about his personal “mentor” (check out the audio of Brat on WMAL, below), who Brat also felt “[would] be a great spokesman for the conservative principles that we all share.” Of course, given that Larry Sabato’s Crystal Ball and the Cook Political Report have both moved Brat to “tossup” status, maybe he’d be better off keeping his mouth shut, given that almost every time he opens it, he makes a complete fool of himself? On second thought, PLEASE keep talking, Dave! LOL