Chesterfield lawyer and 4th CD GOP Chair Jack Wilson appears to be the next Chair of the Virginia GOP – after John “Anti-Semitic Joke Dude” Whitbeck quit or was forced out by Corey Stewart or whatever happened – and as you can see from the following screen shots (the first from the right-wing “Virginia Freedom Caucus” Facebook page; the second from the Tea Party blog “The Bull Elephant,” the third from the guy he defeated – Chuck Smith), the conservative Virginia grassroots doesn’t seem pleased. Nope, not pleased at all.

As for Chuck Smith, who wanted the job but was passed over by what he called “the good old boy system,” check out his pissed-off Facebook post, below, in which he rips the Virginia GOP for “pure cowardice,” and says of Jack Wilson that he “should be ashamed” for having “relie[d] only on his behind-the-scenes maneuvering to secure his seat.”

In sum, it appears to be one big happy family over at the Virginia GOP — where, by the way, they had just $947 cash on hand as of June 30. They’ve also, of course, got an extremist who likes hanging out with neo-Confederates and white supremacists as their U.S. Senate nominee, and the prospect of losing several of their U.S. House seats in 99+ days. Which kind of raises the question, why would anyone in their right mind WANT the Virginia GOP Chair job anyway??? LOL 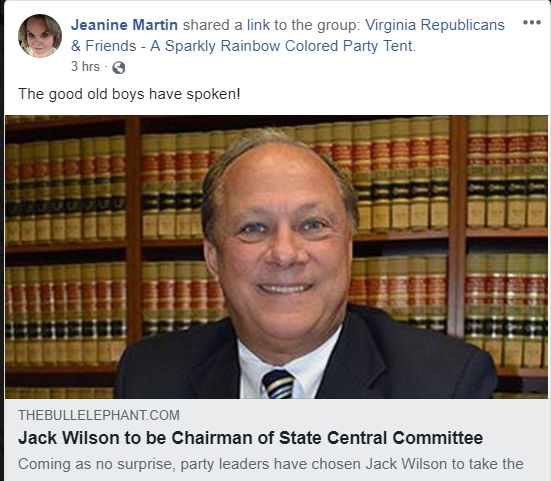 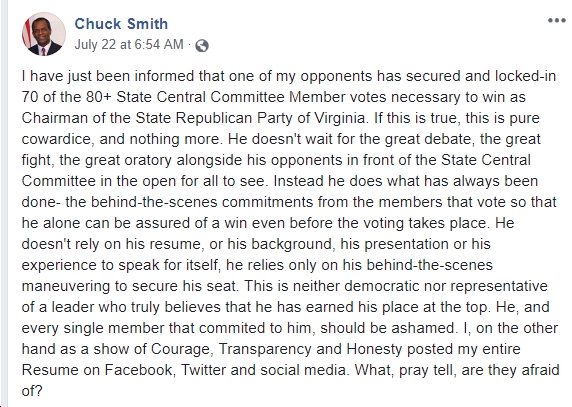